The Roanoke region is working to attract and keep millennials

In the 1990s, every community in the United States wanted to attract people like Mim Young and her husband, J.D.

Working in marketing, graphics and software design, they were solidly in the “creative class,” a group tagged by experts as cultural saviors and economic engines of the modern American city. The couple traveled across four states, measuring communities against 10 criteria.

They ended up in Roanoke. “I wouldn’t live anywhere else,” Young says.

Young’s praise for the Roanoke area is familiar. It’s a great place to raise a family. There’s little traffic to fight, lots of mountains to admire and lots of nature to enjoy. “If you love a livable place that’s manageable, and you want high quality of life, this is your place,” Young says.

Her grown children, however, now live in Los Angeles and Washington, D.C.  “A lot of things that make it so livable and lovable in Roanoke are things that do not appeal to them,” Young says.

They aren’t the only ones. There are at least 20 colleges and universities within 60 miles of Roanoke, including a medical school in the city’s downtown. The area has more than a dozen craft breweries, an expanding innovation corridor, Virginia Tech and its Corporate Research Center and a well-publicized reputation as an outdoor adventure playground. Yet it still has a problem attracting and keeping young professionals.

The purpose of the new position, which the partnership plans to fill in early August, will be to capture young professionals in the area before they get away and to lure back those who’ve already left. Such a position is unusual among smaller metro markets, according to Beth Doughty, the partnership’s executive director, but it’s common in larger areas. “It’s part of modern economic development,” she says.

The partnership also is working on more traditional means of economic development, such as leading an effort to identify and assemble large sites for potential employers. Developing and maintaining a healthy economy, however, involves much more than attracting big companies. According to the Virginia Employment Commission, Roanoke alone has nearly 1,700 businesses with four or fewer employees. “Employment is all kinds of different profiles,” Doughty says. “It’s jobs, jobs, jobs, as everybody says, but it’s not limited to a big box where people work.”

In addition to building upon the region’s relatively new identity as a hip, outdoorsy place, the director of talent attraction can take heart from recent research from the Urban Land Institute showing two Virginia metro areas are already millennial magnets. Hampton Roads’ millennial population grew by more than 16 percent between 2010 and 2015. In the Richmond area, the population grew by nearly 15 percent. Only one other metro in the country topped 10 percent, the Riverside-San Bernardino-Ontario area of California, which saw an 11.7 percent increase.

On the other hand, the Pew Research Center says that, although millennials are less likely to have a spouse or house to tie them to a place, they’re also less likely to move than previous generations did at the same age.

eXperience YP
A volunteer group, supported by the partnership and the Roanoke Regional Chamber of Commerce, has been working on the attraction and retention challenge since 2013. Thomas Becher, senior vice president at the public relations firm ndp, was instrumental in establishing eXperience YP. The original idea was to focus on graduates of nearby colleges. The group, however, quickly learned that it could make a bigger difference by concentrating on young professionals already in the labor market. The volunteers needed to show millennials, in Becher’s words, “There’s a lot of great potential, and there’s more here than you might think.”

The group has held three annual conferences focusing on professional development, and it’s put together a series of quarterly meetings, called eXpand, aimed at keeping the project’s momentum going. Attendance at the conferences has ranged from 100 to 200 people, according to Becher.

While the program is built around young professionals, it’s also meant to help develop understanding between baby boomer bosses and millennial employees.

Becher is among the mentors offering advice to millennials. It’s natural, particularly in an occupation such as public relations, he says, for young professionals to want to be in Chicago, New York or D.C.

“Then you realize you’re going to have four roommates in a shoebox apartment,” Becher says. “You’re going to be stuck in traffic or commuting every day. It’s only later in life that you realize that things like quality of life and short commutes and raising a family do come into play.
So part of bridging the gap between mentors and young professionals is offering them life experience, what they can expect.”

Millennials can expect more than a better quality of life in Roanoke, Becher says, “The nice thing about Roanoke is you can make a difference in a hurry.” 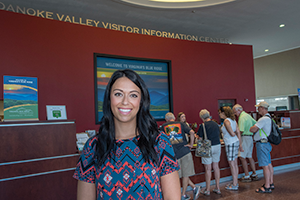 Some millennials are learning that lesson firsthand as part of eXperience YP. Taylor Ricotta, public relations manager at Visit Virginia’s Blue Ridge, is a co-chair of the project. She’s one of about a dozen people who keep the organization going. Those volunteers, Ricotta says, are passionate. “The people kind of steering the ship are doing it because they love it,” she says.

Ricotta echoes Becher’s observation about making a difference. “The thing I love about this area is there is so much opportunity here, and it’s so easy, if you go about it in the right way … for young professionals to kind of exert themselves anywhere and excel,” she says.
The area looked very different to Ricotta when her family moved to Botetourt County in 2001. “They plopped us in the middle of a field,” she says. “I couldn’t wait to leave. I couldn’t wait to get out of here.”

As a student at Radford University, she dreamed of marketing a NASCAR team. An internship required by Radford, however, sent her in a different direction.

Ricotta interned with Sam Steidle, the creator of what would become the CoLab, a co-working space. There Ricotta encountered some of the area’s most engaging entrepreneurs and their infectious energy. She fell in love with the Roanoke region and wanted to find a way to promote it. 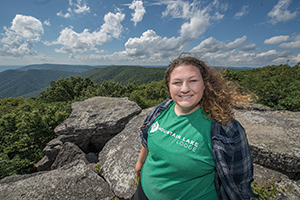 The problem, she says, has been a lack of affordable housing and a lack of jobs — at least, a lack of the kind of jobs that attract young people. “That’s changing now,” Boardwine says. She credits what she calls the area’s “outdoor revamping” and the businesses that has attracted.

Boardwine grew up wanting to stay in the area but assumed there would be no way for her to do that. But the day after she graduated with a degree in environmental resource management and forestry, she got a job as a naturalist with the Mountain Lake Conservancy.  While working there, she’s also pursuing an online master’s degree in parks and resource management. She will start a new job soon, helping to market the Deschutes brewery that’s coming to Roanoke.

While that job is not directly related to her education, Boardwine says Deschutes shares her values. Saying it takes good water to make good beer, she talks about the company’s environmental consciousness.

“It would be awesome to end up with a sustainability-related job” with Deschutes, she says, but the marketing job means Boardwine and her fiancé won’t have to leave. “Both our families are in Botetourt County,” she says, “and we absolutely adore this area.”