Home News Reopening will be delayed in Richmond, Accomack County

Reopening will be delayed in Richmond, Accomack County

The two localities join NoVa in postponing until May 29.

The city of Richmond and Accomack County, the Eastern Shore locality that has seen COVID-19 outbreaks in its poultry plants, will not enter Phase One of Gov. Ralph Northam’s “Forward Virginia” reopening plan Friday. Like Northern Virginia, the localities will wait two weeks until May 29.

The governor’s announcement comes after Richmond Mayor Levar Stoney and Accomack County’s Board of Supervisors made a formal request to delay. In a news release Thursday evening, Northam announced he had amended Executive Order 62, which provides details on the Northern Virginia postponement.

Essentially, the current shutdown that has been in effect statewide since March will remain in place in the “Phase Zero” localities for the next two weeks.

“As I have said previously, Virginia’s Phase One guidelines represent a floor, not a ceiling,” Northam said in a statement. “I have encouraged local leaders to request exemptions when appropriate, and I am pleased to grant the delays for both Accomack County and the city of Richmond.”

“I want to thank Gov. Northam for working with us,” Stoney said in a statement. “This step will make Richmond safer as we face this challenge together.”

Earlier Thursday, Stoney said he had written the governor to request more testing and data on the city’s COVID-19 cases. Dr. Danny Avula, the city’s health department director, had asked the Virginia Department of Health for a current number of tests performed in Richmond but had not received a response by the time Stoney wrote to Northam on Wednesday, the mayor said.

Meanwhile, Accomack County Administrator Michael Mason wrote a letter to Northam at the request of the county board, which voted Wednesday to request the two-week delay.

“The number of cases in the county continues to grow at an alarming rate and, with recent testing in both community and congregate facility settings, local health officials have warned total positive cases could increase by over 50% in a matter of days,” Mason wrote. “Despite having a population that is only .39% of the state population, our number of positive cases represents 2.14% of the statewide totals.”

Both Stoney and Mason said that they would rather rely on regional testing data when making decisions to reopen, as opposed to statewide stats. Stoney notes in his letter that the city’s percentage of positive cases, compared against tests conducted, has “increased over the past two weeks, rather than decreased.”

Richmond and Accomack join the city of Alexandria and the counties of Arlington, Fairfax, Loudoun and Prince William in delaying Phase One of the governor’s reopening plan. The Northern Virginia localities joined as a group to request a delay, which was granted earlier this week.

The Virginia Legislative Black Caucus  also issued calls for a delay this week in the reopening plan, citing the disproportionately high rates of infection among black and Latino people, who “will become guinea pigs for our economy,” they wrote in a letter to Northam. Lt. Gov. Justin Fairfax also called this week for a task force to study the coronavirus’ effect on people of color in Virginia and “aggressively address and remedy” the situation. 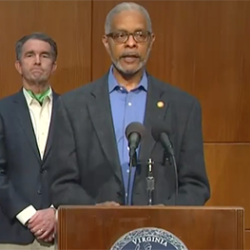