From Navy Hill development team, project would be on Public Safety Building site

Richmond City Council will consider the $325 million sale and redevelopment of the city’s Public Safety Building into a VCU Health medical office tower. The project is proposed by Capital City Partners LLC, a joint venture from two developers who were involved in the failed Navy Hill project.

Mayor Levar Stoney announced Monday that his administration will introduce ordinances and legal documents for the project at the Feb. 8 City Council meeting and request that councilors allow the city to bypass a request for proposals in favor of moving forward quickly with the project.

Capital City Partners — a collaboration between Michael Hallmark of Los Angeles-based Future Cities LLC and Susan Eastridge of Fairfax-based Concord Eastridge Inc. — made an unsolicited offer last May for the aging Public Safety Building, which is on 10th Street near City Hall, part of the property where the $1.5 billion Navy Hill arena-anchored project was proposed in 2019.

Monday’s announcement notes that the purchase price for the 2.92-acre site — negotiated by the city and the developers — is now $3.5 million, up from $3.175 million offered last spring. According to the proposal, there will be no city financing for the new project.

The $325 million mixed-use development would include an office tower with space for VCU Health System administrators and physicians, Class A office space and ground-level retail space, as well as new facilities for The Doorways and Ronald McDonald House Charities, which both provide housing and support for families of hospital patients, and a child care center. According to the mayor’s office, the project is estimated to generate $55.9 million in real estate tax revenue for the city’s general fund over the next 25 years.

In February 2020, City Council killed the long negotiated Navy Hill plan, which had met with widespread controversy due to its proposed public tax funding. About three months later, Hallmark and Eastridge submitted their proposal to buy the Public Safety Building as a site for the office tower, which had been an added incentive offered in conjunction with the Navy Hill project.

“Redeveloping the old Public Safety Building will generate much-needed tax revenue for affordable housing, schools and our neighborhoods, while creating opportunities for minority businesses,” Stoney said in a statement Monday. “My administration proactively worked with City Council to make this long-overdue improvement to the city’s health care infrastructure a win for Richmond.”

The developers, who also are behind the proposed GreenCity project in Henrico County, have pledged to create a $500,000 fund to help offset costs of small businesses to lease office or retail space at the development, as well as funding organizations that support small businesses. The fund also would assist Richmond Public School graduates with scholarships.

Currently the building, built in 1954, houses offices and operations for the city’s Department of Justice Services and the Adult Drug Court, in addition to public works. Maintenance costs about $389,000 a year, and the building has $20.9 million in immediate, deferred repairs, Stoney’s office said. According to documents to be presented to the City Council later Monday, the project would be completed within three and a half years if approved.

The project is expected to be up for a vote at council’s Feb. 22 meeting. 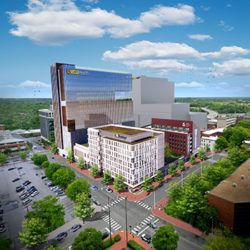