JMU expands its business school with a $99 million learning complex

Weaving through the sea of students walking to class and working on the floor in groups, the business faculty at James Madison University’s Zane Showker Hall had a running joke: Getting to their offices each day was akin to an Indiana Jones adventure.

It wasn’t that Showker Hall wasn’t a nice place; it was just that with the rapid expansion of JMU’s College of Business in recent years, a building that was intended for 2,400 students was straining to accommodate 5,000.

“We were bursting at the seams, basically,” says Elias J. Semaan, professor of finance and business law. “The hallways were always crowded.”

But with the help of a $3.7 million donation — the largest cash gift in the school’s history — change has come to JMU’s College of Business. In fall 2020, the university opened the doors of Hartman Hall, its new 115,000-square-foot academic building, to students and faculty. The $66.5 million facility is the first step toward what will eventually become the College of Business Learning Complex, comprised of Hartman Hall and Showker Hall, which is undergoing a $19.9 million renovation of its own.

JMU plans to reopen Showker in May, with a grand reopening celebration planned for the fall. Altogether, the price tag for the complex will total $99.2 million, including funding for equipment and the $66.5 million for Hartman Hall.

For students, faculty, officials and alums of the Harrisonburg university, the new business school complex is symbolic of the recognition JMU has received from Bloomberg Businessweek for having one of the best public business schools in the country.

From his time as a JMU student in the 1960s through his time running a large company of truck dealerships, James Hartman says the lessons he learned at the university proved invaluable in life and business.

After transferring to the school as a junior in 1968, Hartman attended class by day and drove a truck for his father’s company at night. Upon graduating in 1970 with a bachelor’s in business administration, Hartman helped grow his family’s company, Harrisonburg-based Truck Enterprises Inc., from a single truck to eight full-service commercial truck dealerships. Hartman sold the company to Transport Equipment Co. of Salt Lake City on Sept. 1, 2020.

Hartman has stayed connected with JMU over the years, serving on its board of visitors and then as rector from 2010 to 2012. Through his connections at the university, Hartman knew of the need for a new business school building. The building’s name recognizes Hartman; his wife, Carolyn; their son, Scott; and their daughter, Jennifer Risser, a 2000 graduate who now works in the university’s Center for International Stabilization and Recovery.

The road to a new business complex started in the 2000s under then-JMU President Linwood H. Rose. After Jonathan R. Alger became president in 2012, the university put together a six-year strategic plan. It included overarching principles and goals, as well as key initiatives the university hoped to achieve, including increasing graduation rates, lowering student-faculty ratios, and expanding and renovating buildings such as Showker Hall.

With fundraising needed to achieve those initiatives — including a new business school complex — JMU launched its “Unleashed” capital campaign in October 2018. The campaign had an initial goal of raising $150 million but upped the ante to $200 million after fundraising began exceeding expectations.

“The appetite was there to go for it. It was a little daring. It was the single largest capital project in JMU’s history,” Nick Langridge, vice president for university advancement, says of the fundraising campaign.

For the business complex, JMU needed to secure $16.5 million in private funding. Including the Hartmans’ $3.7 million gift, the university raised a total of more than $19 million in private commitments from more than 2,500 donors. The General Assembly allocated an additional $75.9 million toward the project.

Michael Busing, dean of the College of Business, says that the classrooms at Hartman Hall are “state-of-the-art,” including desktop cameras, 4K projection screens and confidence monitors. For guest speakers both virtual and in-person, the rooms offer array and wireless microphones.

Compared with traditional Harvard-style lecture rooms, Busing says, these classrooms also are more flexible. “What that allows is for students to quickly get into small group conversations … to discuss a topic,” he explains, adding that the classrooms of Showker will be similar after the renovation. “They can convert that classroom from lecture-style to small breakout in about 10 seconds, then [return] to a lecture.”

One fan of Hartman Hall is Maryhelen Storey. Currently in her first year of grad school for accounting, Storey also earned her undergraduate degree in accounting at JMU. She says Hartman compares favorably to the old Showker Hall.

“There’s a much bigger lobby when you walk in that allows for many more seating areas, and then there’s a whole area of study rooms,” Storey says, adding that with greater ease of access, students get more face time with professors. “You see them walking around more, and you also have a new café here that has a full-service eatery, so you’re able to get food here instead of having to leave.”

If there’s a gem in the crown of Hartman Hall, it’s the Gaglioti Capital Markets Lab.

Originally established at Showker Hall in 2011, the lab has been expanded through a comprehensive makeover in its move to Hartman Hall. Even though the previous lab featured financial industry software applications such as SAS, Analytic Solver and Crystal Ball Software, it was crowded.

The lab “was very nice, but at the same time, very limited, so the class could only fit 20 students at the most,” says Semaan, who teaches all of his courses in the lab.

With its new digs, the lab has doubled its seating capacity, and includes an attached board room that can also function as a multiuse area. The lab features 40 computer stations, eight 55-inch flat-panel displays and a 96-inch smart board.

Even with occupancy limitations put in place during the pandemic to help enforce social distancing, Semaan says, the lab is very popular with students.

“You could tell that the students were very excited about it,” Semaan says. “It’s such a pleasant space.” 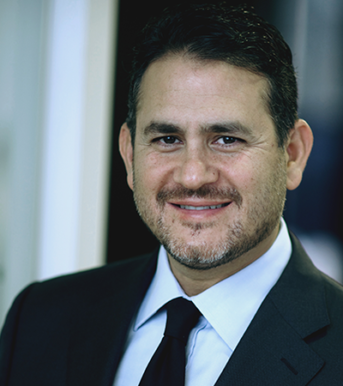 Enrico Gaglioti, a 1994 graduate, says he donated the lab to give students a better understanding of the tools used in the financial services industry. A former partner at Goldman Sachs & Co., Gaglioti co-founded and served as CEO of New York City-based Chiron Investment Management before it was acquired by Philadelphia-based FS Investments, where he now serves as co-president.

“As financial services has grown over the last two decades, these big institutions started broadening out their reach,” says Gaglioti.

Since he entered the workforce, Gaglioti says, JMU has made “a bit of a name for itself” in financial services, with alums reflecting the school’s culture of being collaborative, hard-working, curious and intellectually capable.

“Those are all qualities that are really important in financial services,” he says.

Talk to Alger, JMU’s president, and you’ll hear that the workforce of today and tomorrow needs to be made up of people with the breadth of experience and originality that’s fostered by the school.

“The answers are not in the back of the textbook for the problems employers are trying to solve” today, says Alger. “You’ve got to have students that have a creative and innovative mindset.”

As such, Alger says, JMU graduates are well-suited for the workforce because of their collaborative spirit and the fact that they don’t usually have everything handed to them. It’s a work ethos, he says, that’s reflected by the Hartmans.

“JMU grads are known for rolling up their sleeves, for not being entitled, and the Hartmans are known very much for that attitude,” Alger says.

With the new Hartman Hall and a renovated Showker Hall in the works, Langridge says the business school’s physical infrastructure is beginning to meet the caliber of its programming.

“We’ve got the facility to match the model, and I think that’s one of the wonderful things about the new learning complex.”

Located in Harrisonburg in the heart of the Shenandoah Valley, JMU’s 728-acre campus is divided by Interstate 81. It’s known for its distinctive bluestone buildings on the campus’ west side, as well as Newman Lake near Greek Row and the university’s 125-acre Edith J. Carrier Arboretum, which has numerous gardens and wooded areas with 100-plus-year-old oak and hickory trees.

JMU has nearly 140 undergraduate and graduate degree programs, ranging from accounting and computer science to international business, psychology and nursing.

Gift from D.C.-based philanthropists Bill and Joanne Conway is the largest in the nursing school’s history.

Funding to be used for job development programming