The face of Virginia is changing. More immigrants and minorities make up its population, more veterans are returning home, and more rural residents are planning a different future as mining and agricultural jobs disappear.

What do they all have in common?

They are part of a group that could largely be defined as nontraditional students, and they’re the ones that Virginia’s community colleges say may be the answer to keeping Virginia competitive in the 21st century.

Robert Templin, president of Northern Virginia Community College (NOVA), has been thinking a lot about the jobs of the future and who’s going to fill them.
NOVA already has more than 50,000 students, but Templin argues that the doors have to be opened even wider so that more qualified workers can be brought into the job stream, especially those who have an aptitude for scientific and technical positions.

“We’re going to have many more job vacancies in Virginia than we currently have qualified workers to fill them — 840,000 new jobs [that require training beyond high school] between now and the year 2022,” Templin says. “An equal number of jobs will be vacant, because baby boomers will be retiring.”
Turning to nontraditional students is part of the answer for building a qualified workforce, Templin adds.

Under his leadership, NOVA has created a strategic plan to increase college access to more than 25,000 additional students drawn from low-income and immigrant communities by creating closer relationships with area high schools and nonprofit organizations.

“Over the next 30 years, Virginia will grow by 2.3 million [people]. Eighty-five percent of that growth will come from minorities and immigrants,” Templin says.
The Boulder, Colo.-based Western Interstate Commission for Higher Education, an authority in forecasting student trends, says the proportion of Hispanic students among Virginia’s high school graduates will soar from 6 percent in 2008-09 to 16 percent by 2023-24.

Asian/Pacific Island students will double from 6 percent of the class to 12 percent by 2027-28.

Meanwhile, the proportion of white and African-American students will de­­cline over the same period.

Oscar Lopez, a second-year student at NOVA, is part of Virginia’s changing face.

His parents were immigrants, and he is the first member of his family to go to college — his dad is a mail handler, his mom a cafeteria worker — and he wants to become a physician. He has declared a major in biology.

“Right now I’m taking chemistry and physics, basic calculus. It’s hard. I stay up a lot of nights, but I want to study medicine — I want to be a doctor,” Lopez says.

Lopez, 20, came to NOVA from Annandale High School in Fairfax County through a program known as the Pathway to a Baccalaureate, which is one of several initiatives to put nontraditional students on the road to higher education.

The Pathway to a Baccalaureate program helps underprepared students, through a web of support services and counselors, make the transition from high school to college.

“We identify students with potential who are not likely to go to college, unless someone guides them,” Templin says. “This year we have 10,000 students in that program, and they’re going to college at a rate of 90 percent. Historically, it’s half of that.”

If there is one kind of worker that technology-driven Northern Virginia craves perhaps more than any other, it’s the one who has the ability and the drive to enter a STEM-H career.

The acronym, a rallying cry for those who believe the U.S. is trailing in high-skill areas, stands for science, technology, engineering, math and health.

At a November economic summit in Williamsburg sponsored by the Virginia Chamber of Commerce, Templin told business leaders about a NOVA program that focuses on low-income, immigrant, first-generation college-goers interested in STEM-H careers.

By signing a contract in the 11th grade, the students trigger a college preparation program that provides them with counselors and a support network.

Those who successfully complete the program are guaranteed admission to George Mason University.

Templin told the economic summit that NOVA now has 8,000 of these students who are graduating from the community college at twice the rate of other students.

The program operates under the rubric of SySTEMic Solutions, and the goal is to develop a sustainable STEM pipeline in Northern Virginia.

Science and engineering occupations are projected to grow at more than double the rate (20.6 percent) of the overall U.S. labor force (10.1 percent) through 2018, according to data from the Bureau of Labor Statistics.

“If we don’t produce enough STEM workers, technology companies in Northern Virginia will reach out to foreign countries and other states to get the people they need,” says Roger Ramsammy, provost of the NOVA’s Manassas campus who heads the college’s STEM program.

Returning vets
Veterans returning from America’s wars and others exiting service branches as the military downsizes also are part of the cohort of nontraditional students receiving special attention from community colleges. 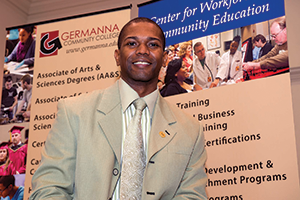 Last year, for example, Virginia’s community college system served 65 percent more veterans (9,404) than they did in the 2008-2009 school year (5,703).
Of those, women accounted for nearly one-third of the veterans enrolled, compared with only 10 percent of the U.S. veteran population.

Nnamdi Small, who worked for six years as an avionics technician on Marine 1, the president’s helicopter, now assists veterans at Germanna Community College in Fredericksburg.

Germanna has experienced a 61 percent increase in its number of veteran students since 2008-09.

Small, who is a former Germanna student, says there once was a huge support gap for veterans leaving the military for a civilian education.

But community colleges such as Germanna have worked hard to close the gap, by bolstering transition services and outreach to veterans at a centralized point.

More than 6 million of the state’s 8.2 million residents live in Virginia’s urban crescent, stretching from Northern Virginia to Richmond to Hampton Roads.

If it were a state, DuBois says, this urban area would rank No. 2 nationally for educational attainment, with 90 percent of the population having high school diplomas and 38 percent holding at least a bachelor’s degree.

By contrast, if the rest of Virginia — stretching from the Eastern Shore through Southern Virginia to Southwest Virginia and up through the Shenandoah Valley — were a state, the chancellor says, it would rank last in the nation for educational attainment, with one in four people there failing to finish high school and only 19 percent holding at least a bachelor’s degree.

Scott Hamilton, president of Mountain Empire Community College in Big Stone Gap, is trying to change that picture. He has been stressing in chamber of commerce meetings that his school has to be a major player in the area’s economic development.

Hamilton says many Southwest Virginia wage earners have been pushed out of well-paid jobs in the coal mining industry, which has fallen on hard times.

“The jobs of the future will require a two-year associate [degree] in a technical field or a four-year degree,” says Hamilton, who once worked in the mining industry.

“Our role is to provide highly qualified workers, to retrain coal miners or to bring in people who want to better themselves.”

The Virginia Tobacco Indemnification and Community Revitalization Commission has worked with Mountain Empire in providing scholarships to students in the college’s four-county service area, where the poverty level is twice the state average of 11 percent and median family income is about half the state average of $63,636.

Recently, for example, the Tobacco Commission — funded by the 1998 settlement with the nation’s four biggest tobacco companies — presented a $420,000 award to Mountain Empire for its Tobacco Family Scholarship and AIMS Higher Scholarship programs.

The scholarship programs encourage high school students in Lee, Scott, Wise and Dickenson Counties, and the city of Norton, to pursue higher education.

Overall, the Tobacco Commission has given $7.5 million in grants, including $6.3 million in scholarship money, to Mountain Empire over the years.

“I believe education will be one of the enduring legacies of the Tobacco Commission,” says Donna Stanley, Mountain Empire’s vice president for institutional advancement.

NOVA’s Templin says that community colleges from every part of Virginia must engage nontraditional students — whether immigrants or minorities, veterans or rural resident dealing with economic shifts.

“It has to be done, or we’re all losers,” Templin says. “Business loses, and society loses.”