Business took Robert Janssen this spring to Mexico and Saudi Arabia — two countries where the prevailing opinions of President Donald Trump are on opposite ends of the spectrum.

Janssen is president of Northern Defense Industries Inc. (NDI), an Alexandria-based technology and critical infrastructure company specializing in air, land and subsea security systems. International sales have made up a major part of the company’s business since its founding in 2002.

In April, Janssen traveled to Saudi Arabia, where business leaders had overwhelmingly positive views of the current administration. But just a few weeks earlier he had been in Mexico, where the company does business with its Navy. There, given Trump’s promise to build a wall along its border with the U.S. and his attacks over the North American Free Trade Agreement (NAFTA), the administration remains quite unpopular.

But while Mexican business owners may share their sentiments over a beer, politics rarely enter business discussions.  “Business is business,” says Janssen, whose company this year entered VALET (Virginia Leaders in Export Trade), one of the state’s export development programs.

“Business can be affected by politics, but if you’re an international businessman bringing value-added goods and services to a customer that needs them, you do proper negotiations, and you ensure it’s a win-win for everybody. Typically, everyone leaves politics and emotions out of it.”

Trump has long derided globalization and international trade deals as unfair to the U.S. and its manufacturers. His presidency comes at a time when Virginia is making a major push to increase exports to diversify its economy.

And while Virginia business leaders say Trump’s positions have introduced some uncertainty into the international marketplace, the state’s exporters still are eager to seek new markets.

“We certainly have been dismayed by some of the rhetoric that has been coming out of Washington on trade, but it has not stopped us from continuing to push the important role it has for us in the commonwealth,” says Todd Haymore, Virginia’s secretary of commerce and trade. “I would argue that it’s helped us double down on the narrative about the important role trade plays for us.”

Since taking office in January, the Trump administration has withdrawn from an Obama-era trade pact with Pacific Rim nations (the Trans-Pacific Partnership), informed Congress it plans to renegotiate the NAFTA, slapped 20 percent tariffs on Canadian softwood lumber and signed an executive order instructing his Cabinet to scrutinize any major trade deficits with countries.

Trump also has threatened to ignore unfavorable rulings from the World Trade Organization (WTO) — an organization that settles disputes among its 163 members.

Despite the threats to current agreements and Trump’s rhetoric, state officials haven’t been deterred.

Gov. Terry McAuliffe, for example, continues to travel on foreign trade missions. Since Trump’s election, he has visited Southeast Asia, Japan, South Korea, Japan, Australia, Mexico and Canada. Most recently, McAuliffe traveled to Europe.  In June, while announcing an agreement to promote trade with a Mexican state, the governor tweeted that Virginia builds “opportunities NOT walls!”

“Uncertainty is more of the general concern,” says Art Moye, executive vice president of the Virginia Maritime Association. “Trade itself tends to overcome these political influences. Trade is all about supply and demand, and trade is more dictated by consumers than political processes or a particular administration.”

The importance of trade continues to rise in Virginia, becoming a major factor in the growth of its economy. Virginia exported goods and services worth $35.2 billion in 2015, according to the Brookings Institution. A recent study by the Virginia Chamber of Commerce showed that nearly 30 percent of the commonwealth’s economic growth can be attributed to exports.

“The reality is that international trade has created huge new markets and the potential for tapping into them … is unprecedented,” says Van Wood, a Virginia Commonwealth University international marketing professor who works with companies examining export opportunities. “What we really don’t need to say is: ‘Let’s cut back on trade.’ We need to get more people involved to take advantage of these markets.”

The future of NAFTA
Throughout his campaign and presidency, Trump has slammed NAFTA as an unfair deal, reportedly almost scrapping it in April before deciding to renegotiate the agreement.

Brett Vassey, president and CEO of the Virginia Manufacturers Association, says the dialogue about NAFTA actually has spurred interest in exporting. “In a sort of a strange turn of events, even though there’s a lot of discussion by this administration about leveling free trade agreements, the reality is there’s a whole new focus on international markets and exporting American goods,” says Vassey. “It really has engaged people.”

NAFTA also can be important in driving foreign direct investment (FDI) by international companies that open operations in the U.S., says Paul Grossman, vice president of international trade for the Virginia Economic Development Partnership. “Some internationally owned companies that are making a product here in Virginia, employing Virginians, are exporting first to NAFTA countries and then to South American countries,” he says. “So it’s a location factor because of these trade agreements. If those are in peril, then the FDI aspect becomes tougher attracting these companies in the first place.”

The proximity of Canada and Mexico also make them easier markets for many U.S. companies to enter. That certainly was the case for Jamie Baisden, the president and CEO of QMT Windchimes in Manassas Park.

His company has exported its custom-tuned wind chimes to Canada for almost a decade and has established itself as a “non-resident” importer there.The designation makes the company’s shipping, customs and pricing process more efficient. The non-resident importer status only is possible with a country with a good working relationship with the U.S., Baisden says.

“What I do know is that the healthy relationship between the United States and Canada has made  expanding my business and jobs in the U.S. easier than if I was trying to sell into a country where we had poor relations,” says Baisden. “We’ve gone through the process of becoming trusted partners. That’s not going to happen in a country where we have poor relations, especially for a small company like us.”

While Virginia’s trade promoters believe scrapping NAFTA altogether could have been devastating to relations with its neighbors, they say the agreement could use some updating.

NAFTA was put in place almost 25 years ago, well before the development of e-commerce. In addition, the agreement doesn’t cover services, which now make up more than half of Virginia’s exports. “That’s a challenge because, by and large, they aren’t really covered by NAFTA,” says Grossman. “That’s an area where Virginia could benefit from a modernized agreement.”

Looking for fair trade
While Virginia’s exports to its neighbors have soared since the agreement took effect, NAFTA played a role — along with automation and competition from China — in the decimation of textile, apparel and furniture industries in Southern and Southwest Virginia.

One of the survivors of that tumult wants to see more fairness in the world marketplace. That could be achieved through tougher enforcement mechanisms and trade deals that encourage a level playing field, says John Bassett III. He is chairman of Vaughan-Bassett furniture in Galax, the largest wood furniture bedroom manufacturer in the U.S. Vaughan-Bassett’s furniture-making plant is the only one left in the city, which used to have six.

The decline of the U.S. furniture manufacturing could have been less severe if U.S. exporters knew their rights in the international marketplace, Basset says.

Bassett led a campaign in 2004 that ultimately resulted in the WTO ruling that China illegally dumped furniture on the open market. Had the industry known its rights, fewer American furniture companies would have folded, he says. “It was a total tsunami, and the industry disappeared. Not all of them should have.”

Bassett says he supports globalization but believes the U.S. government needs to do a better job of ensuring that U.S. companies can compete fairly.  “We have to compete in an international marketplace, but we shouldn’t be asked to compete with one arm tied behind us,” says Bassett. “Our government has to be more vigilant to ensure that American businesses and manufacturers, primarily, [compete] on a level playing field.”

Scrapping a Pacific trade deal
In his first week of office, Trump pulled the U.S. out of the Trans-Pacific Partnership, a trade agreement negotiated for seven years among Pacific Rim nations.

In May, the 11 remaining countries in the pact agreed to move forward without the U.S.

The deal had a lot of support in Virginia, including from theVirginia Manufacturers Association. The association had hoped the deal could open markets for several industries, such as heavy equipment, chemicals, and even food and beverage.

One of its concerns is that, with the U.S. withdrawal, China will seize growth opportunities in these markets. The manufacturing association still hopes the U.S. can make trade deals in the region.“If this administration can cut a better deal for the American manufacturer, then we are all in,” says Vassey. “But we don’t want to see them sit idle while the Chinese eat our lunch.”

Navigating a complex future
Amid Trump’s array of protectionist rhetoric, only two things are certain in international trade: the complexity and length of time required to make major changes.  For example, it could take years to renegotiate and implement a new NAFTA deal.

“Things move slowly, and they’re very complex,” says Grossman. “But in the meantime, Virginia companies can and should be marketing themselves because ultimately international trade, like all business, is consumer-driven.”

Leading from the ground up 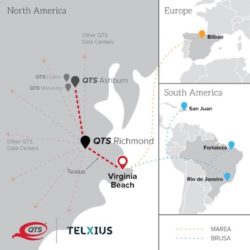