Ed Horton says one thing he enjoys about his work is the opportunity to help veterans find good jobs.

Horton was a master chief petty officer, the highest enlisted rank in the U.S. Navy. Today he is a department head at the Mid-Atlantic Maritime Academy (MAMA) in Norfolk. Some of its students train to qualify for jobs in the civilian maritime industry. Others are active-duty service members who are trying to upgrade their skills.

“We’ve had several who got out of the service as an E-6 [Navy petty officer first class], got their credentials here and were making twice as much money 30 days after separation,” Horton says.

The academy is a Virginia Values Veterans (V3) company that works with the Virginia Department of Veterans Services in helping former military personnel find roles in the civilian workforce. 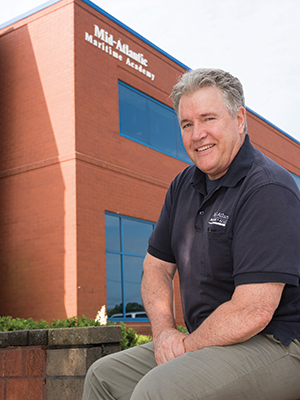 “Mid-Atlantic Maritime Academy’s V3 story has a few layers to it,” says Capt. Ed Nanartowich, the academy’s president. “V3 promotes the hiring of veterans, and MAMA seeks veterans as a premier human asset in delivering deck and engineering courses to mariners nationwide.”

Nanartowich is a retired federal employee with the Navy’s Military Sealift Command. He also served as a Navy reservist for 30 years.

The Maritime Academy trains about 3,000 students a year, including transitioning veterans, active-duty service members and others interested in a life aboard a ship. School officials say word of mouth, from graduates and the companies that have hired them, is one of the best recruiting tools they have.

Since its founding in 2007, the academy’s facilities have grown exponentially. “Our school was built for one thing: maritime students,” says CEO Arthur Goldman. “When we first started, we had 1,200 square feet, and now we’re at 35,000 square feet. We have more certifications from the Coast Guard than any school in the country.”

Last year, the academy was named the Hampton Roads Chamber’s Small Business of the Year. It holds classes during the day and at night to accommodate the various schedules of students.

About 40 percent of the students are using the GI bill to pay tuition, which varies according to the course.

Many of the academy’s more than 20 instructors are veterans.  “Having vets on staff is critical to our success since tapping into their expertise of actual ship operation is the stock-in-trade of our school mission,” Nanartowich says.

“With senior chiefs and master chiefs, you’ve got people who have great leadership skills, good presence in the classroom and a level of expertise that goes beyond the norm,” he says.

Officials say all of the academy’s graduates go on to work on ships in various maritime industries. “There are a lot of jobs in the oil patch in the Gulf,” Nanartowich says.

But the petroleum industry is not the only place graduates can go. The head of the U.S. Maritime Administration has told Congress that the industry will need 70,000 new employees by 2021.

Horton says he’s seen a lot of young veterans use the academy as a bridge to a good job on the civilian side. “We’re always in contact with them; we’re always tracking them,” he says of the school’s graduates. “They’re out there living the ultimate dream, because they found us, and we trained them properly.”

Former Master Chief Adrian Batchelor, who heads the academy’s engineering department, reiterates V3’s message to transitioning veterans: They need to start early in preparing  themselves for life as civilian workers. “The guys starting 12-18 months out are doing better,” he says. “They can get additional training before they separate.”

Students are generally run through a series of 40-hour, intensive one-week courses as they work toward attaining their maritime credentials. Some courses can be as short as a day, while others can last for weeks or months.

The academy also has a boot camp that involves four weeks of classroom and basic training, followed by a four-week internship with a maritime company.  The boot camp program helps students with job placement skills, smoothing their transitions to full-time jobs.

The academy was the recent recipient of a V3 grant totaling several thousand dollars, 75 percent of which officials says was used to provide bonuses to instructors, while the remainder was devoted to marketing educational materials to veterans.

While the grant was relatively small, Nanartowich says it was the thought that counted. “The end result is the clear perception that both our company and the veterans are held as relevant in V3 objectives.  That, in a fashion, sums up the V3 program,” Nanartowich says.