Shamin in negotiations over control of flagship hotel

The Hilton Richmond Hotel and Spa in Short Pump, the flagship of Chester-based Shamin Hotels’ empire, may change hands as a result of the COVID-19 pandemic.

According to a complaint filed in Henrico County Circuit Court on Dec. 2, 12042 West Broad Street Holdings LLC, the Bethesda, Maryland-based noteholder on the property, alleges a breach of contract, saying Shamin fell behind in its loan payments beginning in April 2020. The 254-room hotel in Short Pump was considered the gem of Shamin’s hotel portfolio when it opened in 2009. Now, Shamin CEO Neil Amin says his company is cooperating with the noteholder to allow them to take control of the hotel through receivership and a possible public auction.

The filing states that Shamin borrowed $45 million from JPMorgan Chase Bank National Association on Oct. 11, 2013. Amin says that the hotel was appraised at $68 million at the time of the loan. As of Dec. 1, 2020, Shamin owed $46.8 million on the loan, including a principal amount of $40.2 million, $1.18 million in accrued interest, $1.19 million in default interest and more than $127,000 in accrued late fees, according to the filing. The filing also requests that the court appoint Fairfax-based Crescent Hotel Management Services LLC to keep the property open and run it while a foreclosure sale is conducted. The plaintiff states that the property may be worth as little as $26 million.

Via email, Amin said that the purpose of the 2013 loan was to refinance the original construction loan.

“This is a unique situation that is affecting all conference hotels nationwide and with our revenue declining by $10 [million] since the start of the pandemic and a noteholder that is not being supportive, we felt that this is the best decision for our company and our organization,” said Amin, who runs the business his father began in 1979.

Amin added that Shamin, one of the largest independent hoteliers in the United States with more than 60 properties, reached out to the noteholder at the beginning of the pandemic to use a portion of its $1.8 million in reserves that were held by the lender to make mortgage payments, stating that the same request was approved by many of Shamin’s other commercial mortgage-backed securities lenders.

After initially seeming cooperative, Amin said the noteholder “demanded significant lender fees and unsuitable guarantees in order to access those funds. We then offered other solutions such as providing a [significant] influx of capital to support the hotel over the next few years or paying off the loan at value significantly higher than the lender’s valuation.”

Amin said they offered making interest-only payments for a time, then pay off the loan in full to avoid foreclosure, as well as pay a significantly higher value than the lenders’ own valuation of the loan. Amin says that his other hotels are performing better than the Short Pump Hilton because they are less dependent on conferences and the revenue gained from them.

Calls and emails to Stephen K. Gallagher and Caleb E. McCallum, the plaintiff’s lawyers listed in the filing, were not immediately returned on Wednesday.

Amin said that new Shamin properties are on schedule to open in 2021, including The Landing at Hampton Marina, a Tapestry Hotel by Hilton in Hampton, as well as a Home2 Suites and a Hampton Inn and Suites in Short Pump.

This article has been corrected since it was published. 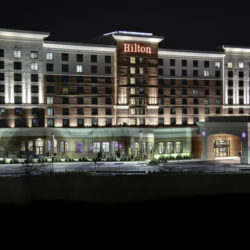 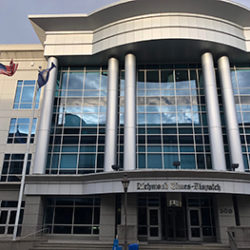 Richmond area's largest hotel corporation will share space in the building with the newspaper. 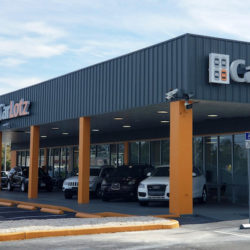