Community colleges look for ways to attract and retain students

Keeping food pantries stocked at its three campuses is one of the ways J. Sargeant Reynolds Community College helps its students stay in the classroom.

And retention of students has become an imperative.

The Richmond-based school has experienced one of the steepest drops in enrollment among the state’s 23 community colleges, which as a group has seen a huge decline in students during this decade.

By the start of the current academic year, enrollment had plummeted 34 percent, to 8,737 students, according to figures published by the State Council of Higher Education for Virginia (SCHEV).

Besides looking for ways to increase enrollment, community colleges like Reynolds are exploring all options to retain current students.

Only about 20 percent of full-time students at Reynolds complete an associate degree within three years, according to its president, Paula Pando.

And that’s where the food pantries come in. More than a dozen of the system’s other colleges also have programs to help students who may not have enough to eat. The pantries are supported by private foundations.

“Part of the enrollment issues facing community colleges across the country [is], yes, there are declining birth rates; yes, there are fewer high school students, and we’re going to see fewer and fewer. But that completion piece, students returning, that is where I believe we’re going to start turning the tide,” Pando says.

The high-water mark for the community college system was the 2011-12 academic year, when its combined headcount was 197,226, according to SCHEV.

And the worse may be yet to come because the U.S. birthrate plummeted after the Great Recession of 2007-09.

“Beginning in 2026, we will see a decline in traditional college-age student population that is more dramatic than we’ve ever seen before,” Glenn DuBois, the chancellor of the community college system, said at the beginning of this academic year.

In 2026, the country’s college-age population is expected to drop 15 percent over five years, according to research by Nathan Grawe, an economist at Carleton College in Minnesota.

That means Virginia’s community colleges need to bolster their enrollment of older students, says Jeffrey Kraus, assistant chancellor for strategic communications for the community college system. “For every student graduating from high school this June, we have 13 Virginians between the ages of 25 and 44 who have no postsecondary credential. The point is: We have Virginians around who could really benefit from what we’re offering,” Kraus says.

“When the economy is bad, and unemployment rates go up over 4 percent or so, more people will go to community colleges to get that credential they need or a course … that hopefully will give them an edge in finding a job or finding a better job,” says Tod Massa, policy analytics director of the community college system.

In January, the statewide unemployment rate was 2.8 percent, down 0.5 percentage point from a year ago.

Credential completion
One of the bright spots for community colleges has been FastForward — a program designed to help Virginians earn credentials for high-demand occupations.

Under FastForward, students enroll in short-term training and pay one-third of the tuition. The remaining two-thirds are paid by the state.

Students who do not complete the program and earn certification will be required to pay the second third of the tuition cost, and the college will have to pay the final third.

Since FastForward was initiated and funded by the legislature in 2017, J. Sargeant Reynolds has awarded more than 2,000 credentials, Pando says.

Workforce credentials earned by FastForward students are technically noncredit. So, they do not count toward the credit enrollment numbers that community colleges report to the state.

Ninety percent of the J. Sargeant Reynolds students holding credentials for high-demand occupations were employed within the first year of completing the FastForward program — with many receiving 30 to 50 percent increases in their wages, Pando says.

Moreover, community college officials have said that more than half of those who have earned workforce credentials through the FastForward program have returned to college for additional training, raising the potential that they could become full-time students.

This year’s General Assembly appropriated an additional $4 million for the grants supporting the FastForward program, raising the biennial total from $9.5 million to $13.5 million.

Kraus says a major effort in its six-year strategic plan, Complete 2021, is “to triple the number of credentials we put into the economy.” 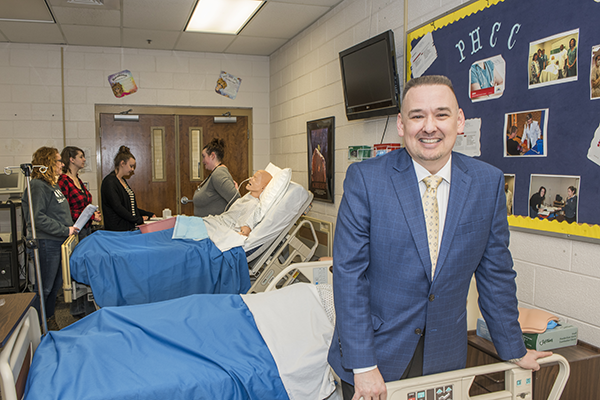 Some community colleges are turning to philanthropic sources to add students to their rolls.

An example is Patrick Henry Community College near Martinsville. The college’s full-time equivalent enrollment (FTE), those students taking at least 15 credit hours, jumped 8.1 percent this year to 1,669 after seven years of declining enrollment.

The enrollment surge at Patrick Henry was fueled by a free community college education program (called SEED) for local residents. SEED is funded by a three-year, $3.1 million grant from the Harvest Foundation, a nonprofit organization whose mission is to build economic prosperity in the community.

“Our SEED funding with Harvest requires students to take a minimum of 15 credits per semester” in order to take advantage of the program, says Greg Hodges, Patrick Henry’s vice president for academic and student success.

“So, Harvest’s SEED program has allowed PHCC to stop the enrollment decline [a 40 percent loss in seven years], and more students are now taking more credits. Our local data shows that our growth is tied directly to SEED.”

For example, Virginia Western Community College in Roanoke has a public-private partnership called the Community College Access Program (CCAP). The program covers tuition for three years at Virginia Western for current-year high school students who do not have sufficient financial aid to pay the full costs. CCAP supports as many qualified students as possible, based on student need and funds available for each locality.

Last year the Virginia Western Educational Foundation, which oversees the CCAP program, launched the CCAP2 campaign — its second fundraising campaign to benefit CCAP. The campaign’s goal is to raise $6.5 million by 2021, Meyer says.

“Colleges are becoming increasingly dependent on philanthropic organizations, whether they are investing money for textbooks or supplies, uniforms or fees, or, in the case of the Harvest Foundation, tuition,” says Hodges of Patrick Henry.