Home Opinion The recession that wasn’t

The recession that wasn’t

What if they held a recession and no one showed up?

Last summer, economic experts began ringing warning bells of an impending downturn, as evidenced by an inverted yield curve of short-term Treasury bills vs. long-term Treasury notes. And when one combined the inverted yield rate, said to be perhaps the most accurate predictor of recessions, with the Trump administration’s ongoing U.S.-China trade war, it was enough for many financial writers to begin drafting obits for the current bull market.

And then a funny thing happened.

“Those factors that would ordinarily cause one to be concerned about a recession have dissipated,” observes Christine Chmura, CEO and chief economist for Richmond-based Chmura Economics & Analytics. “The yield curve is no longer inverted because the Federal Reserve reduced short-term interest rates. [And] the China concerns seem to be resolving.”

In fact, we’re now more than 10-and-a-half years into the longest economic expansion in U.S. history.

Yet, at virtually the same time in mid-January that President Trump signed the first phase of a new trade deal aimed at dialing back tensions with China, Forbes and other financial publications were once again warning readers about a potential 2020 recession. Factors this time included a recent Deloitte survey in which 97% of the nation’s chief financial officers predicted a recession this year.

However, the Virginia economic experts with whom I’ve been talking say that’s bull. (Pun intended.)

“I don’t see anything in the economic data that says we better buckle our seat belts,” says Bruce Yandle, a distinguished adjunct fellow at George Mason University’s Mercatus Center.

Lisa Sturtevant, chief economist for the Virginia Realtors association, says that, despite hearing “little rumblings of concern” in the media, “I’m pretty optimistic for the state’s outlook in 2020.”

She and Yandle are joined by Virginia Tech Professor of Investment Management Raman Kumar in saying there won’t be a recession this year. “If you had talked to me in March or April 2019, I would have been a lot more pessimistic,” Kumar allows.

And Chmura? She thinks the economy is solid for at least another two years.

Here are some of the points they mentioned:

The U.S. consumer confidence index has remained high and that’s critical, Chmura says, “because consumers are 70% of the economy. Whenever they get nervous, that might be a sign that something is going to take a turn.”

It’s true that Target and some other traditional retailers posted disappointing holiday earnings, but financial analysts say that has more to do with competition from online shopping and services than any real dip in consumer spending or confidence.

The economy is held back by politics

The Trump administration predicted 3% growth in annual real GDP growth for 2019, but politically driven factors hampered that goal, keeping the economy closer to 2% for the year, Yandle says. The early 2019 federal government shutdown, the longest in U.S. history, had a negative impact, he says, as have trade wars with China and other nations, which harmed U.S. exports and manufacturing. Trump immigration policies have also tightened the labor pool, Yandle adds.

Growth has slowed a little bit, experts say, and we can probably expect that 2020’s growth will be a little less than 2019’s, but that’s mostly due to the fact that unemployment is so low, driving wages up and making workers harder to find.

Virginia has a buffer

Even in the unlikely event of a 2020 recession, Virginia’s in a strong position to weather a crisis. Not only have we seen recent significant economic development announcements from companies like Amazon and Microsoft, but our strong federal contracting community “tends to insulate us from economic recession,” Sturtevant says. “When the nation goes into a recession, Virginia tends to benefit [because] the federal government ramps up spending.”

While we can’t predict events such as wars or terrorist attacks that could have an adverse impact on the economy, there also isn’t an expiration date on good times, Chmura and Sturtevant say. The 2001 and 2008 recessions were caused by factors such as the dotcom and housing bubbles that are absent now.

“The truth of the matter is you need to have something to precipitate an economic downturn,” Sturtevant adds. “Australia hasn’t had a recession in 29 years, so it doesn’t have to happen.” 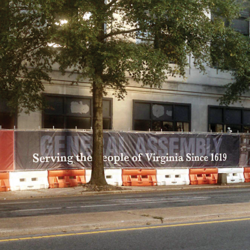 Senators borrow a page from the junior varsity playbook