Home News Reopening: Too early, or not soon enough?

Gov. Ralph Northam is likely to loosen restrictions next Friday on “nonessential” businesses, allowing gyms, spas, theaters, dine-in restaurants and other enterprises to reopen after more than seven weeks, but feelings are mixed about the wisdom of this decision, given that Virginia saw a 36% increase in confirmed and probable COVID-19 cases during the last week.

About two-thirds of Americans are worried states are lifting restrictions prematurely, saying it’s too soon for businesses such as retail stores, movie theaters, gyms and restaurants to reopen, according to a Washington Post-University of Maryland poll released May 5. And 68% of those polled believe that the worst of the pandemic is happening now or is yet to come. Excluding New York City, cases in the rest of America are steadily rising. Modeling from the Centers for Disease Control and Prevention predicts that new cases will rise by 20% in reopening states, with 100,000 more deaths expected nationwide from the coronavirus by early August.

Acting against the advice of public health experts, President Donald Trump has pushed states to ease restrictions and reopen businesses as soon as possible, however, in light of the devastation the pandemic has wreaked on the economy. In April, America saw the sharpest drop in employment since the Great Depression, with unemployment surging to 14.7%. More than 33.4 million Americans have filed initial unemployment claims since mid-March and countless businesses have closed, filed for bankruptcy or are struggling to stay afloat amid social distancing measures.

In a May 5 ABC News interview, Trump acknowledged that it’s “possible” there will be an increase in COVID-19 deaths as a result of reopening. That same day, during a factory tour in Arizona, Trump said, “Will some people be affected? Yes. Will some people be affected badly? Yes,” the president said. “But we have to get our country open and we have to get it open soon.”

Here in Virginia, Richmond-based Legal Aid Justice Center called Northam’s reopening proposal “jaw-dropping,” as well as “reckless and cruel,” arguing in a statement Wednesday that reopening businesses prematurely will put lives at risk, particularly those of low-wage workers and black and Latino Virginians. Richmond Mayor Levar Stoney, a Democrat, said in a roundtable discussion this week that people of color will be most negatively affected as businesses reopen and people “on the front lines” contract COVID-19.

Others in Virginia are advocating for fewer restrictions on businesses, although many say that they want to do so cautiously, limiting exposure to the virus. Bobby Dyer, Virginia Beach’s mayor and a Republican, said he hopes beaches will reopen by Memorial Day weekend, considering the fact that North Carolina’s Outer Banks is reopening to tourists on May 16. Republican state Sen. Amanda Chase of Chesterfield County, who is seeking the 2021 GOP nomination for governor, led a second Reopen Virginia rally Wednesday on the streets surrounding the state Capitol grounds in Richmond, wearing gloves and a mask, although it was pulled down as she spoke to protesters. On her Facebook page, she posted, “Is it fair for the government to pick winners and losers? I say it’s not.”

Northam says he’s basing his reopening decision on several statistics: the percentage of positive COVID-19 tests against the total number of tests — a percentage that has continued to decline since April 20 as more people are tested — and the number of people hospitalized with the virus, which also is relatively low statewide, with 1,613 people currently in Virginia hospitals with either positive or pending COVID-19 test results, according to the Virginia Hospital & Healthcare Association’s Thursday data. The number of ventilators in use remains around 20%, and there are close to 4,700 hospital beds available, as well as 3,695 extra beds added under a statewide executive order. No hospitals in the state are reporting difficulty in obtaining personal protective equipment, or PPE, in recent days.

Those who oppose or have concerns about reopening Virginia next week point to other factors:

Only Arizona and Puerto Rico are conducting fewer tests per capita than Virginia, although Northam and other officials regularly mention that Virginia has quickly ramped up its testing capacity in recent weeks, and is now able to test about 6,500 people a day. As of Thursday, VDH reports that 122,119 people in Virginia have been tested, and 136,558 tests have been conducted in total, with some people tested more than once.

Virginia’s testing lag, which state health officials attribute in part to concerns about preserving enough PPE for health care workers and warding off a severe backlog of tests at the state lab when it was the only facility in Virginia producing test results, has remained a sticking point for many who are worried that the commonwealth will see a spike in COVID-19 cases after Northam allows businesses to reopen.

Nationally, an internal White House document forecasts that after states reopen, the United States could see as many as 3,000 deaths a day in June.

However, Northam and other state governors are under pressure from local officials and business leaders, who are seeking to roll back social-distancing restrictions as industries continue to flounder and unemployment numbers skyrocket because of the pandemic.

Reopening proponents point to the fact that Southwest Virginia and other less-populated regions of the state have seen far fewer coronavirus cases, hospitalization and deaths. Many in those areas voiced support for a regional reopening plan, which the governor rejected, partly out of concern for people traveling from hot spots and carrying the virus to less-affected communities.

Even some elected officials in the Peninsula, where outbreaks continue in the region’s nursing homes, are saying it’s time to reopen, noting the toll of the shutdown, particularly on restaurants and tourism businesses. Six officials from James City County and York County’s boards and the Williamsburg City Council signed an April 24 letter to Northam, writing, “We would like to see a phased reopening of business begin as soon as possible, provided we can ensure that our citizens are protected through reasonable limitations and the maintenance of social distancing.” They further suggest that restaurants and businesses that offer services like hair care should be allowed to reopen “with strict guidelines.”

Jay Langston, executive director of the Shenandoah Valley Partnership, said that consistency from the state is needed for businesses to succeed as they reopen. “We cannot afford to tell our businesses they can reopen if they meet certain regulations, and then amend them a week later because the government has additional regulations,” he said. “Businesses, nor the public, can withstand this uncertainty.”

The Virginia Chamber of Commerce issued its “Blueprint for Getting Virginians Back to Work” initiative April 30, asking for businesses to fill out a survey by May 15, in an effort to “help move the commonwealth beyond the term ‘essential business’ to a plan that eventually allows all businesses to reopen.” President and CEO Barry DuVal said in a statement that “many businesses have remained open during this pandemic using precautionary measures like increased remote working arrangements, health screenings at entrances, providing workers with protective gear, rerouting workers through separate entrances and exits, and staggering shifts to limit interaction,” measures that others can take in reopening safely, he added.

Localities across the commonwealth have adjusted their annual budgets in recent weeks, rolling back spending and furloughing workers. In a call this week with Roanoke Regional Chamber of Commerce members, Sen. Tim Kaine said that most cities and counties are expecting at least a 15% decrease in tax revenue due to business closures.

As for Northam — who holds the keys to restarting Virginia’s economy — the May 15 reopening is “not written in stone,” he said Wednesday. If the number of COVID-19 cases or hospitalizations in the state rise beyond where he’s comfortable, or if his counterparts in Maryland and Washington, D.C., present concerns about the reopening date, the governor says he may postpone. 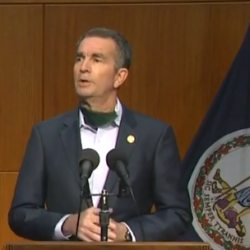