For decades, Tri-Cities residents planned big shopping trips to Roanoke, Knoxville or destinations even farther away, but new retail developments on either side of the state line could change that.

The Pinnacle, in Bristol, Tenn., and The Falls, in Bristol, Va., have attracted outdoor retailers Bass Pro Shops and Cabela’s, respectively, and they’re recruiting more stores.

The developments, which are both public-private collaborations, aim to draw visitors traveling Interstate 81 in addition to shoppers from the Tri-Cities area.

Local leaders see the retail centers as added attractions in an area that’s seen steady tourism growth. Bristol Motor Speedway, which seats 160,000 fans, has been the site of NASCAR races for decades. Now the recently relocated and upgraded Birthplace of Country Music Museum in Bristol, Va., is attracting a growing number of visitors. The museum celebrates the city’s historic 1927 recording sessions, often called the “big bang” of country music.

“That’s been a big draw for us,” says Archie Hubbard, the mayor of Bristol, Va. “The tour buses are coming in now.”

Steve Johnson, a former pro football player, began construction on The Pinnacle in 2013. He started Johnson Commercial Development in 1990 with the Virginian Golf Club, a community built around a course designed by Tom Fazio. The company has developed more than 50 properties.

“My father-in-law and I recognized the need for shopping and dining because of what we saw here at the Virginian. Purchasers of real estate — second-home owners, retirees — kept asking, ’Where do you eat, where do you shop?’ ”

Johnson designed the Pinnacle to take advantage of the region’s combined population of about 300,000 along with its proximity to I-81. “No one had ever tried to find the right access, right visibility, right tenants to accommodate this super-regional demographic,” he says.

The State of Tennessee helped the project. It allowed Bristol, Tenn., to recoup more of its state sales tax to fund a $20 million general obligation bond issue for grading and public infrastructure.

The first anchor tenant, Bass Pro Shops, opened in fall 2014. By the next spring, Belk and Marshalls stores opened, and nearly two dozen other retailers  are open, under construction or have signed a lease.

The Pinnacle got wheels turning in Bristol, Va., which planned its own project, The Falls. The city purchased land and recruited a developer, Brent Roswall of Interstate Development.

“As they develop it, we turn that portion of the land over to them,” Hubbard says. “They’d collect the rent as their income stream, and we’d collect all the property improvement and sales taxes and meals taxes.”

In addition to the city’s 7 percent meals tax, it would also collect one-fifth of the state’s 5 percent sales tax. Bristol also asked the Virginia General Assembly for permission to collect an extra 2 percent sales tax from sales at The Falls, using the money to pay back bonds issued to buy and prepare the site.

The legislature initially balked but eventually approved the change a year later. The delay meant the Virginia development fell further behind The Pinnacle.

The Falls has attracted Cabela’s and Lowe’s. Others retailers have committed to joining them but have been slow to open. The delay has left the city figuring out how to manage debt it incurred from the project. Hubbard says Bristol still hasn’t locked the debt into permanent bonds but is “still doing short-term stuff.”

Johnson meanwhile has continued building out The Pinnacle. Last fall he announced the project’s second phase, with 15 more retailers.

Johnson intends to someday extend The Pinnacle across the state line to land he owns in Washington County, Va. Officials there are open to that possibility: “Washington County wants to see more retail development,” says County Manager Jason Berry.

Hubbard says he’d love to see that expansion, too. “I would consider that good news. That means everything’s booming, and we’ve got to have more room.” 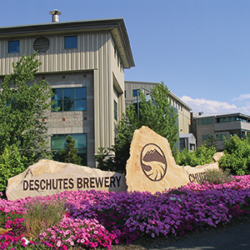