While some localities in Southern Virginia felt good about 2015, others saw the year as the beginning of a rebuilding process.

Martinsville and Henry County had a strong year, pulling in investments of more than $21 million and adding more than 660 jobs. “We had a good mix of existing companies expanding and a new company,” says Mark Heath, president and CEO of Martinsville-Henry County Economic Development Corp.

The area, which has experienced chronically high unemployment, has diversified its economy during the past 10 years. “We are looking to bring in more high-tech and high-paying jobs,” Heath says. “Our key targeted industries include food processing, aerospace and plastics. We’ve also seen a resurgence of textiles and furniture, too. We will talk to anybody that can fog a mirror.”

Several existing companies expanded in 2015. Meat snack manufacturer Monogram Foods, for example, has completed a $7.2 million project involving the construction of a warehouse and distribution center in Martinsville, adding 101 jobs. That project has been completed. The project is Monogram’s third expansion since 2009.

Also, eBay Enterprise invested $5.8 million in its 400,000-square-foot expansion in Henry County. The completed project will add 191 jobs, raising the company’s full-time workforce to more than 500.

He sees a trend across the Southeast in which new technology enables companies to hire fewer people in many industries. The workers who are hired have high skill levels.

“We have not done a good job in technology training over the years,” Heath says. “People are now realizing that, while a four-year degree is important, you also need people with two-year associate degrees and/or certifications. We need all of that. We need to rethink our educational and workforce capabilities. That’s what keeps me awake at night.”

Martinsville and Henry County are designing programs to meet local industry needs. As an example, the Center for Advanced Film Manufacturing was created for Eastman Chemical Corp. about two years ago. “Sixteen people have graduated and have gone on to work for Eastman,” Heath says. “We are also building training for eBay that has the same sort of platform but will be designed for their specific needs.”

Jeff Reed, the executive director of Virginia’s Growth Alliance, has the task of marketing Emporia and 10 Southern Virginia counties, a territory covering 4,400 square miles. He is optimistic about this year. “Spring is looking promising,” he says.

A number of companies in the region expanded last year. Microsoft Corp. invested $402.4 million in November to expand its data center in Mecklenburg County, a move expected to create 42 jobs.

Two other expansions involved companies in Charlotte County. Blue Ridge Railcar spent $2.4 million and will be adding 24 jobs, while custom cabinet manufacturer Corsi Group hired 32 employees last year and plans to add 110 jobs in the next few years. Corsi had invested $5 million to purchase a building and expand it in  2014. 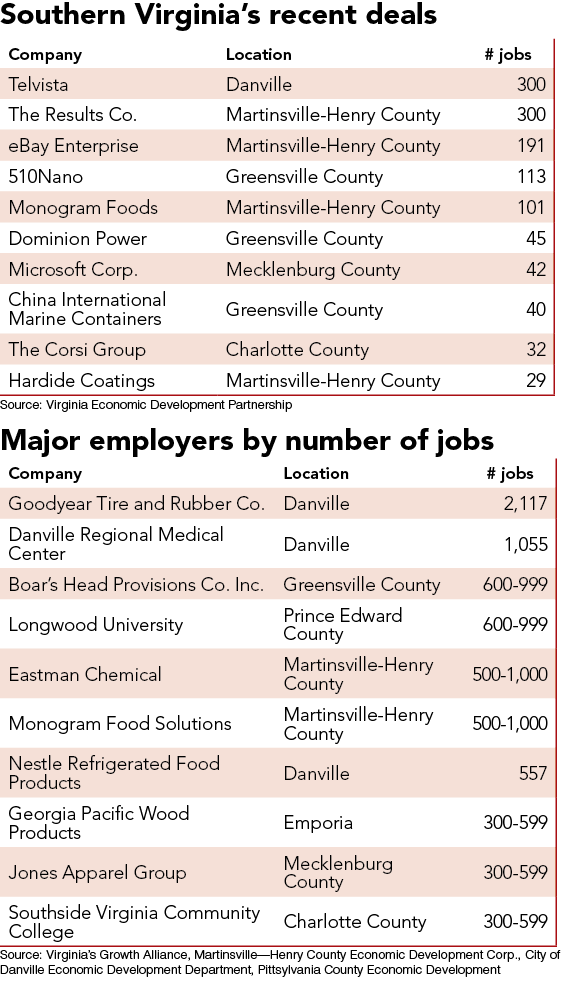 The Foreign Affairs Security Training Center (FASTC), a foreign-service training center for the U.S. Department of State, plans to spend more than $400 million on a training facility at Fort Pickett in Nottoway County. “When fully operational in 2020, it would train 8,000 to 10,000 people per year,” Reed says.

A solar panel manufacturer, 510Nano, plans to spend $11 million creating a manufacturing facility in Greensville County, a project expected to produce 113 jobs.
Meanwhile Dominion Power’s new $1.4 billion natural gas-fueled power plant in Greensville  will create 45 jobs. “They are going through the federal regulatory process right now,” Reed says of Dominion. “They have applied for all their permits with the State Corporation Commission.”

The region still faces challenges, including lack of access to natural gas and broadband. “We have a great infrastructure for broadband, but the last mile continues to be a challenge,” Reed says. “We also have a lack of cellular service and access to capital. We are trying to nudge cellular providers to provide the latest connectivity, availability and range to our customers.”

He believes recent changes to the Tobacco Commission grant program will hurt the region. “They now require a dollar-for-dollar match. If they put up $100,000, we have to put in $100,000,” he says. “That will hurt us. We don’t have sources such as large foundations.”

Virginia’s Growth Alliance supports Dominion’s efforts to build a natural gas pipeline, the Atlantic Coast Pipeline, as long as the region has access to it. “About 210 miles will go through our region,” Reed says.

Pittsylvania County spent last year improving its infrastructure. The county now has several industrial parks with broadband service. “At least three of our industrial parks have infinite speed, and that is pretty exceptional,” says Matt Rowe, the county’s economic development director. “We are fortunate to have gigabit-broadband pure fiber that goes to our parks. We are on the main fiber line that runs from Northern Virginia to Georgia.”

The county has many pad sites ready, ranging from 1 acre to more than 60   acres. “We are also working with Danville on pad sites of 100-plus acres in Berry Hill, a 3,500-acre industrial park. That’s an ongoing project,” he says.

Local training programs are a plus for the county and Danville. Last year the Gene Haas Center for Integrated Machining opened at the Institute for Advanced Learning and Research. The center, part of the Capstone Integrated Machining Technology project, is a partnership between the institute and Danville Community College. “It currently has 40 graduates, but in the next four years it will have 140,” Rowe says. “They will be gobbled up by a lot of employers.”

The Launch Place, which was funded by the Danville Regional Foundation with a $10 million grant to encourage entrepreneurial activity in the River District, now has several businesses operating in the district. “We anticipate significant growth in this activity,” Tucker says. “Danville will continue to pursue both traditional and nontraditional economic development activities.”