Trump pledges to expand the Navy 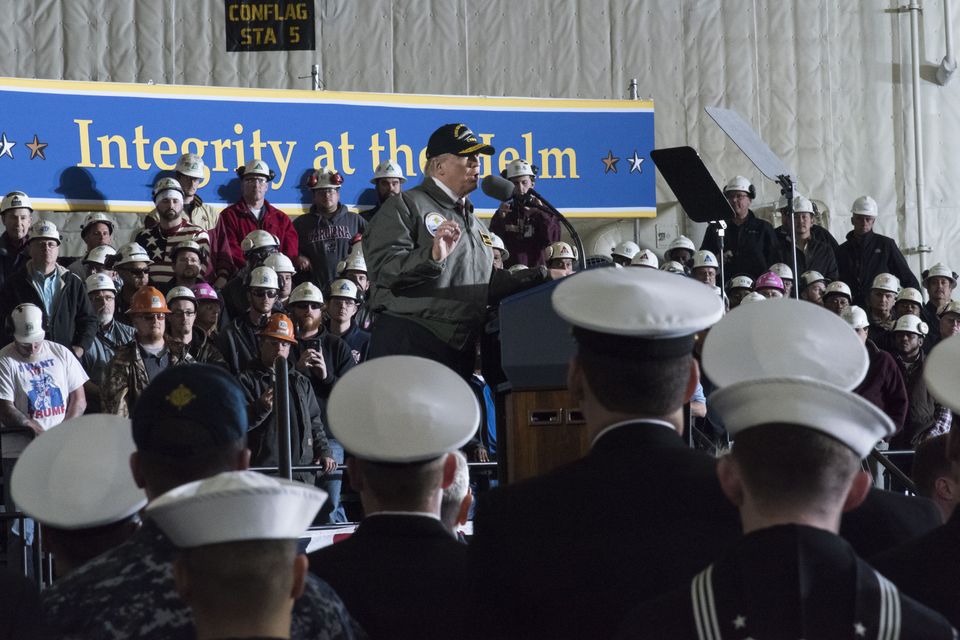 In a speech aboard the USS Gerald R. Ford Thursday at Newport News Shipbuilding, President Donald Trump promised a massive rebuilding of the U.S. military, including a major expansion of the Navy fleet.

That pledge could be good news for the shipyard, Virginia’s largest industrial employer, which built the Ford.

Trump has proposed a 10 percent increase in defense spending. “This great rebuilding effort will create many jobs in Virginia, and all across America, and it will also spur new technology and new innovation,” Trump said.

Trump said his plan includes “having the 12-carrier Navy we need.” He also is asking Congress to eliminate the sequester, deep federal budget cuts in defense spending.

The Navy is currently required to have 11 aircraft carriers. The Ford will replace the inactive USS Enterprise. The new 100,000-ton, 4.5 acre aircraft carrier is considered to be the most expensive Navy aircraft carrier to have been built with a price tag of $12.9 billion. It will carry 4,500 personnel and 70 aircraft.

If Trump’s plans come to fruition, it could have a major impact on Virginia, a major recipient of defense spending contracts. Virginia defense contractors include Newport News-based Huntington Ingalls Industries, the parent company of Newport News Shipbuilding, which is the sole builder of aircraft carriers and one of only two producers of submarines for the U.S. Navy.

“We look forward to working with the new administration, the Navy and our supplier base of 5,000 companies in 50 states across the nation to continue building the most effective and affordable warships,” Huntington Ingalls Industries said in a statement.

“We are focused on reducing costs in all of our shipbuilding programs,” the company said. “We see the most progress in reducing costs in those programs that are mature and where we are have stable requirements, can leverage the economic advantages of block buys, and are in serial production. We are investing $1.5 billion over the next five years to continue to reduce costs across all of our programs.”

Trump praised the history of the Newport News Shipbuilding, noting that the 75th anniversary of the crucial World War II naval battle of Midway will occur this June.  The “backbone of the American fleet at Midway was three beautiful aircraft carriers, the Yorktown, the Enterprise and the Hornet,” he said. “All three were built with American hands right here at the Newport News Shipyard.”

Thousands of people who gathered to hear the speech, including employees of Huntington Ingalls, were enthusiastic about Trump’s message.

“I think what we do here at Newport News Shipbuilding is special,” said Joseph Dvorak, who works as a production manager of new carrier construction. ”I’m excited about the possibilities to grow the business and to grow our military.”