Turn up the volume

The Port of Virginia is benefiting from pent-up demand for goods, seeing a significant uptick in cargo volume since last fall, which translates into more work for truckers.

The $800 million-plus investment made in the port’s Virginia International Gateway and Norfolk International Terminal has allowed more room for vessels, and “cargo is flowing really well,” says Joe Harris, spokesman for the Virginia Port Authority.

There was a little hiccup in March when the Taiwan-owned Ever Given container ship blocked the Suez Canal for several days, delaying six ships expected in Hampton Roads in April, but otherwise, “there have been no congestion issues or backups,” Harris says. (West Coast ports have been seeing significant backups in recent months, due to increased container volume and pandemic-related labor issues.)

In January, the Port of Virginia set a new record for monthly TEU (20-foot equivalent unit) volume, handling nearly 271,000 units. That was a 19.2% increase over January 2020, when the U.S.-China tariff war was in full swing. The increase was driven by heavy import and export volumes, as well as a significant number of empty containers being sent out to fill with in-demand goods from other nations.

That’s a stark difference from last summer, when the port hit bottom in terms of cargo. “We knew there was going to be a rebound, and we are seeing that,” Harris says.

The tariff war and subsequent COVID-19 pandemic led to a dip of more than 4% in the port’s overall volume numbers for 2020.

“We saw soft volumes February through May and even into June last year, then some leveling off, and then we picked back up. From October [2020] to February, it was gangbusters,” says Harris.

On the trucking end, “we stack in a strategic manner that gives us higher capacity,” explains Mark Higgins, the port’s director of motor carrier experience. The trucking reservation system, instituted in 2018, makes the system smoother than before, he adds.

Before 2018, the nature of doing business from a truck driver’s standpoint “was chaotic,” Higgins says. “Containers were spread throughout our yard. Our drivers could expect a trip through the terminal that took an hour, two hours or more. It wasn’t uncommon to be two to four hours inside the terminal to get one container.”

Today the reservation process gives drivers predictability and reliability, something they had requested, Higgins says. “The chaos has been eliminated.”

Turn times at the port now average 40 minutes or less, below “the golden measure” of one hour, Higgins notes. “We have been able to surpass that. The lower turn times allow trucking companies and motor carriers to plan better and serve customers in a more consistent manner.”

When the port first introduced the reservation-based approach, there was resistance to mandatory reservations. “There were motor carriers that thought it won’t work,” Higgins says. “Some that were most vocal are now our biggest proponents.”

Among them was Bob Eveleigh, first vice president of the Tidewater Motor Truck Association and chief operating officer of Norfolk-based Port City Transportation.

“We have seen dramatic improvement in the operations of the port for the past two years,” says Eveleigh. “Turn times are good. You can get in and out quickly. It’s a complete 180-degree turn from two to three years ago.”

The increase in volume is generally challenging to “some other ports along the East Coast,” says Ray Jalkio, TMTA’s president and vice president of sales for Chesapeake’s Service Transfer Inc. “The Port of Virginia is now delivering the best turn times compared to others on the East Coast. It’s a positive now.”

Harris predicts the heavy flow of cargo will last through June. “We think it will level off and still stay strong,” he says. “So much has to do with how quickly and widespread vaccines go, consumer confidence and the strength of the economy. Indicators show an economy that is rebounding, and that bodes well for the Port of Virginia.” 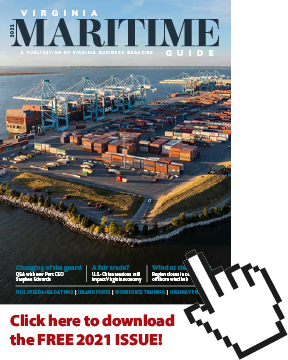