Two Virginia lawyers have pleaded guilty to an extortion plot targeting a multinational chemicals company with demands for $200 million in “consulting fees,” according to a U.S. Department of Justice news release.

Lawyers Timothy Litzenburg of Charlottesville, and Daniel Kincheloe of Glen Allen, both pleaded guilty June 19 in Charlottesville federal court. They face up to two years in jail and possible discipline by the Virginia State Bar. The two lawyers had formed their own practice, Golden Ratio LLC in October 2019, according to State Corporation Commission documents. Litzenburg had been working with consumer litigation around the Roundup weedkiller for years before the case in question occurred. He was part of the team of lawyers that won a $289 million verdict against Roundup manufacturer Monsanto in 2018.

The extortion attempt occurred while the two lawyers were preparing for the Roundup-related litigation, according to court documents. Litzenburg and Kincheloe had signed up hundreds of clients with possible Roundup cancer claims and threatened to inflict financial and physical harm on an unnamed company that supplied chemicals for Roundup if the company didn’t pay a $200 million in consulting fees. The two lawyers planned to split the fees among themselves and two associates, according to the statement of facts.

The case filed in the Western District of Virginia federal court is tied to last week’s $10 billion settlement by Bayer of tens of thousands of claims that the herbicide Roundup caused cancer. In 2018, Bayer completed the $63 billion acquisition of agrochemical company The Monsanto Co., which was the original producer of weedkiller Roundup. Roundup has faced claims that it causes cancer

“First and foremost, the Roundup settlement is the right action at the right time for Bayer to bring a long period of uncertainty to an end,” Bayer CEO Werner Baumann said in a statement. “It resolves most current claims and puts in place a clear mechanism to manage risks of potential future litigation. It is financially reasonable when viewed against the significant financial risks of continued, multiyear litigation and the related impacts to our reputation and to our business.”

In the June 19 filing, Litzenburg and Kincheloe admitted to offering to protect the unnamed company from mass tort litigation in exchange for a $200 million consulting fee.

“This is a case where two attorneys blew well past the line of aggressive advocacy and crossed deep into the territory of illegal extortion, in a brazen attempt to enrich themselves by extracting millions of dollars from a multinational company,” Brian A. Benczkowski, assistant attorney general of the Justice Department’s Criminal Division, said in a statement.  “Today’s pleas underscore that when crimes are committed, members of the bar ⁠— like all members of the public ⁠— will be held accountable for their actions.”

In October 2019, the two lawyers drafted an email to the unnamed company, making threats to injure the property and reputation of the company unless the two were paid the $200 million fee demanded. According to the statement of facts, lawyers for the unnamed company did not cooperate with the requests and recorded threats made by Kincheloe and Litzenburg.

“Right now, we’re your only problem or potential problem,” Litzenburg said in one threat, according to the statement of facts.

The lawyers are scheduled to be sentenced on Sept. 18 by U.S. District Judge Norman K. Moon. The conviction could carry a maximum two-year sentence.

“The consequences of extortion are far-reaching, affecting not only individuals, but also the economy in the United States and the world’s financial markets,” Delany De Leon-Colon, inspector in charge of the U.S. Postal Inspection Service, said in a statement.  “Those who engage in this type of abuse of power while in positions of authority should know they cannot escape detection. They will be found and they will be held accountable for their actions.” 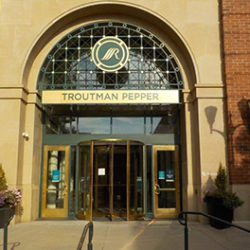 Richmond is one of the largest of Troutman Pepper's 23 offices