Some saw ridership down by more than 90% last month

Airports across the state saw significant drops in passenger numbers during March and April, while most people sheltered in place and canceled travel plans during the pandemic.

“Most of our revenues are directly impacted by the reduction of passenger traffic and aircraft operations,” he said. “On the expense side, we have greatly reduced expenses. We have a voluntary furlough program in effect with high participation. All of our employees understand the challenges the airport is facing.” Voluntary furloughs allow employees the option to give up working hours.

Newport News/Williamsburg International Airport hasn’t posted statistics from 2020 and didn’t respond to information requests by Virginia Business. But Delta Air Lines Inc. announced last week that it would be suspending service from that airport, along with nine other U.S. airports, citing an 85% reduction in its second quarter schedule.

“The safety of our employees and customers remains our primary focus as we navigate these challenges together,” Sandy Gordon, Delta senior vice president for domestic airport operations, said in a statement. “By consolidating operations while customer traffic is low, we can allow more of our people to stay home in accordance with local health guidelines.”

“As far as April, we won’t have final data until mid-May, but we anticipate a passenger drop in the neighborhood of 90% to 95% versus April 2019,” he said in mid-April. “People have been instructed to stay home because of the COVID-19 pandemic and there is little demand for air travel in the U.S. at this time.”

However, “from early receipts, the traffic drop in April appears to meet our expectations,” he confirmed Wednesday. In March, the airport saw a 50.45% decrease in passengers as compared to March 2019.

Similarly, in Northern Virginia, Washington Dulles International Airport and Ronald Reagan Washington National Airport both saw more than a 50% decrease in the number of passengers in March, compared to the same month in 2019.

Reagan saw a 56.4% decrease in domestic commercial passenger activity, compared to March 2019, and Dulles saw a 50.9% decrease. Despite the hit to business, the Metropolitan Washington Airports Authority (MWAA), which oversees both airports, hasn’t made layoffs.

“At this time, there has been no personnel actions taken by the Metropolitan Washington Airports Authority that impact our staff,” MWAA spokesperson Micah Lillard said.

Roanoke-Blacksburg Regional airport saw a 97% decline in April, seeing only 1,823 passengers, compared to the same month in 2019, according to Bradley Boettcher, Roanoke Regional Airport Commission director of marketing and air service development. “With our traffic off 97%, our revenue is off as well,” Boettcher said. The Roanoke airport saw a 50.7% decrease in March 2020, compared to the year before.

In mid-April, the Virginia Department of Aviation announced that approximately $310 million in federal funding would be shared by 47 of Virginia’s public-use airports through the Coronavirus Aid, Relief and Economic Security (CARES) Act. Of the 47 funded airports, Reagan, Dulles, Richmond International and Norfolk International were among the top recipients in funding.

“These funds will support airport capital expenditures, airport operating expenses such as payroll and utilities, and airport debt payments,” Mark Flynn, director of the Virginia Department of Aviation, said in a statement. “Tens of thousands of Virginians will benefit from this funding as airports will be able to pay not only their employees but contractors, construction workers and others who work on or around these 47 airports.”

For Roanoke-Blacksburg Regional, the CARES Act funding will allow the airport to avoid employee furloughs and cover any operating shortfalls, Boettcher said. “We are in the process of identifying strategic projects that we can use the funding for while keeping an ample amount of reserves to cover operating losses since we don’t know how long the downturn in traffic will be,” he said.

Richmond International plans to use the CARES Act funds in a similar fashion. 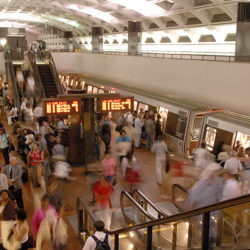 Metro is reducing service in response to coronavirus

Commonwealth Transportation Board funds are aimed at helping transit agencies recover from ridership losses and other COVID-19-related operating expenses.

15 Metro stations to reopen this weekend