Home News Wait till next year

Wait till next year

Long-planned projects due to blossom in 2017

New Year’s Day is still more than six months away, but 2017 already is shaping up to be a banner year for Hampton Roads. After years of planning and hurdling obstacles, the region is preparing to open a slew of prominent new and revitalized venues while starting construction on several big-ticket projects.

Construction cranes, in fact, have become a regular fixture on the Hampton Roads skyline. A high-tech luxury hotel is going up in downtown Norfolk, while around the corner the Waterside Festival Marketplace is getting a long-awaited face-lift.  Also in Norfolk, construction gets underway in May on a long-awaited, $75 million outlet mall. Meanwhile, Virginia Beach’s oceanfront is witnessing the rebirth of the iconic Cavalier Hotel, and in Newport News, a mixed-use center will house high-tech firms along with retail and luxury apartments.  The construction signals a regional revitalization as Hampton Roads continues to work its way out of the 2007-09 recession.

That’s especially true for Norfolk, whose rebirth began downtown and is now spreading to other areas of the city, sparking interest from millennials and entrepreneurs. “We are a very aggressive, forward-looking city,” says Chuck Rigney, the city’s economic development director. “We’re putting together an executable plan and going after it.”

The Main and The Cavalier
Developer Bruce Thompson, CEO of Gold Key/PHR Hotels and Resorts, is making his first foray into his hometown with The Main, a $164 million public-private investment project. Scheduled to open downtown next March, the 300-room hotel bearing the Hilton brand will feature three full-service restaurants. Its major selling point is The Exchange, a 105,000-square-foot conference center that city leaders say will allow Norfolk to attract larger meetings and conventions. “We knew we were missing the tourism market and the ability to host signature conferences that need the setting and experiences that The Exchange can provide,” Rigney says. “It will be the most technologically advanced conference center in the U.S.”

The Main will provide a high-energy eclectic hospitality experience, says Michael Woodhead, Gold Key’s vice president of marketing. A premium seafood restaurant will be on the first floor, while the second floor will feature an Italian eatery along with a piano bar. The Grain, a rooftop bistro overlooking the Elizabeth River, will become a downtown destination, Woodhead adds. “It’s going to pull people from all over Hampton Roads. Between these three restaurants, there’s something for everybody going on in downtown Norfolk. If we weren’t supremely confident that all three will quickly become local favorites, we wouldn’t be doing it.”

While Gold Key brings a contemporary flair to downtown Norfolk with The Main, the company is evoking old-style grandeur on the Virginia Beach oceanfront with the restoration of the 89-year-old Cavalier on the Hill. The hotel will reopen as a five-star member of Marriott’s Autograph Collection in 2017. Its sister property, the Cavalier Oceanfront Hotel, will be replaced by a 300-room Marriott hotel, with the opening targeted for 2018.

Gold Key also is building 82 homes on the grounds of the Cavalier on the Hill.  The project is expected to generate $41 million to $52 million in new taxes during its first two decades, while creating 200 year-round jobs and 330 seasonal positions.

Norfolk’s Waterside Festival Marketplace also is undergoing extensive renovations. The Cordish Cos., a Baltimore-based developer, is fronting the nearly $40 million public-private project scheduled to open next spring. “This will bring a new visitor experience onto the riverfront,” Rigney says. “The city leadership wants to create the greatest urban waterside park in the U.S.”

Also downtown, developer Buddy Gadams is converting the 24-story Bank of America office building into 275 luxury apartments, a ground-floor restaurant and a fitness facility. Tagged the Icon at City Walk, the $100 million project will bring 500 additional residents to downtown when it opens next year.  “It will be a great address for residents and removes largely vacant office space from our inventory,” Rigney says.

As part of the City Walk project, Gadams is renovating the adjacent vacant office building for Automatic Data Processing (ADP). The New Jersey-based  human-resources firm announced in March that it will invest $32.5 million to open a customer-service center in the space, bringing nearly 2,000 jobs downtown. With the influx of ADP jobs, Hampton Roads anticipates annual regional earnings of about $158 million as the overall economic impact climbs to almost $465 million. Nearly half of the ADP jobs are expected to be in place by the end of the year, with the rest filled by mid-2017.

“Together, ADP, the Main, the Waterside District and Icon at City Walk will be a game changer for downtown,” Norfolk Mayor Paul Fraim said in his “State of the City” address in March. “They will dramatically enhance downtown’s vibrancy and help boost and diversify the economy, creating more investment opportunities.”

Outside of downtown
While the downtown district has seen the lion’s share of economic development projects, Norfolk leaders stress that the wealth is being spread around. “We had to fix downtown because, if the apple is rotten at the core, the rest of the apple will die as well,” Rigney says.

He points to Movement Mortgage’s plans to bring more than 800 jobs to the former J.C. Penney building at Military Circle. “There’s a tremendous opportunity to reshape Military Circle. That area can be a significant place for businesses and jobs to locate.”

In addition, Simon Property Group will break ground in May on the $75 million Norfolk Premium Outlets at the former Lake Wright Golf Course. Slated to open next year, the mall is expected to create 800 permanent jobs and generate upward of $3 million in annual tax revenue.

Private employers like ADP, Movement Mortgage and Simon Property Group are expected to enhance the stability of the region’s economy, which has largely depended on Department of Defense spending. That dependence becomes a volatile relationship during times of federal spending cuts.

“The private sector has to start filling in, but it has been slow to do that,” says Vinod Agarwal, director of Old Dominion University’s Economic Forecasting Project. Hampton Roads gained 7,000 jobs last year, reaching a total of 765,383. That number, however, still is below its pre-recession peak of 775,500 jobs.

To be successful, Hampton Roads must start thinking of itself as a regional economy, Agarwal adds. “We can’t think about Norfolk only … or only worrying about Virginia Beach. We depend on each other way too much,” he says.

Virginia Beach arena
Virginia Beach is betting that an 18,000-seat entertainment and sports arena will be a significant generator of new jobs, events and visitors. Developer United States Management is aggressively working to secure financing for the project. “The goal is to have the loan closing in 2016 with construction starting by the end of the year and the grand opening in late 2018,” says Brittany Jeffries, a USM marketing associate.

The Virginia Beach City Council approved the $200 million, privately financed project near the oceanfront late last year, with the city footing the bill for infrastructure improvements. “We see this arena as an iconic symbol for Hampton Roads, not just an amenity for Virginia Beach,” Jeffries adds. “It will not only provide a lot of activities and entertainment opportunities for the city but also attract people from outside the area to experience the region and create jobs and more year-round activities for the region.” The project is expected to generate 2,300 jobs during construction and 440 positions once the arena is in operation.

A sticking point, however, has been the lack of a major athletic team to call the arena home. USM believes that will come in time. “The key to landing a sports team is to have a facility,” Jeffries says, adding that the arena can succeed without a team. “When you have a team, it fills up a lot of the schedule and collects a large portion of revenues. Without a team, you have a lot more prime dates that you can fill with other events.”

Meanwhile, Stephen Ballard, president of S.B. Ballard Construction Co., submitted an unsolicited proposal in March to Old Dominion University for another athletics venue.  Ballard wants to demolish ODU’s existing football stadium in Norfolk, Foreman Field, and replace it with a 25,000-seat facility that would open in 2018.  The proposal includes five stadium configurations, the most expensive of which would cost $124 million. 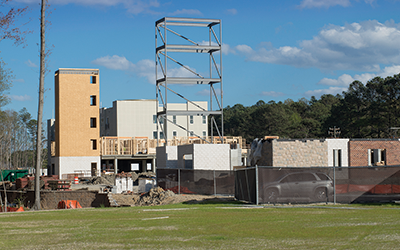 On the Peninsula, construction continues on the Tech Center Research Park adjacent to the Thomas Jefferson National Accelerator Facility.  The project includes 1.1 million square feet of office and lab space, along with a marketplace featuring national retailers making their first foray in the Peninsula, an urgent-care center operated by Children’s Hospital of the Kings Daughters and 284 upscale apartments. W.M. Jordan Co. is developing the $450 million, privately financed project. The mixed-use community emphasizes environment, nutrition and fitness, says John Lawson, W.J. Jordan’s president and CEO. “We want to get people in an environment where they’re collaborating. To do that, we have to provide really interesting retail and entertainment and a great place to live.”

A $1 billion ion collider also wouldn’t hurt. The Jefferson Lab is competing with Long Island’s Brookhaven National Laboratory to become the site for the collider, a coup projected to have about a $4 billion economic impact on the region. Lawson believes the tech center would benefit from the collider and its resulting jobs. “This would be a big attraction to people moving here and hired to work for the construction and operation of the ion collider,” he says. The U.S. Department of Energy is expected to announce in the next two years which site will get the collider.

New construction also is underway at several of the region’s medical facilities. Bon Secours Hampton Roads Health System will open a $20 million medical plaza in Suffolk’s Harbour View this fall that will house the Bon Secours Cancer Institute. Meanwhile, Sentara Norfolk General, ranked as a top hospital in Virginia by U.S. News and World Report, is launching a $199 million expansion. The five-year project will add three floors to the hospital, modernize and expand 18 operating rooms and enlarge the emergency department. With the expansion of its Ambulatory Surgery Center, Sentara Leigh Hospital is in the final phase of a massive, eight-year construction project that saw the construction of two five-story patient towers and an employee parking deck.

Overall, as Norfolk’s Rigney says, the projects represent pieces of a larger puzzle designed to invigorate the region with new — and diverse — economic activity.