What a Norfolk Southern exit could mean for Hampton Roads

When a Norfolk Southern Corp. executive sent a letter to the city of Norfolk and a state agency outlining terms to which the company would agree to move part of its Roanoke office operations to its corporate headquarters in Norfolk rather than to its operational headquarters in Atlanta, he expressed optimism about the Hampton Roads city.

Today, Norfolk Southern again is considering a corporate office shakeup and once more has Georgia on its mind.

Atlanta’s City Council recently approved a $1.9 billion downtown redevelopment project that The Virginian-Pilot reported was key to a relocation of Norfolk Southern’s headquarters to Atlanta. The company is now waiting to see whether Atlanta’s economic development arm will sign off on $600 million in bond financing for a new 750,000-square-foot headquarters building for Norfolk Southern.

Norfolk Southern already has around 1,900 employees at an office building in Atlanta. The company has around 500 employees in its current corporate headquarters in downtown Norfolk at 3 Commercial Place and a total of 982 employees in the Hampton Roads region.

Norfolk Southern agreed to add to its corporate headquarters functions in Norfolk after signing in 2016 a 10-year performance agreement with Norfolk and its economic development authority. The company had relocated about 500 employees in Roanoke to Atlanta and Norfolk.

Under the terms of the agreement, which don’t expire until 2026, Norfolk Southern would get $1.925 million from the Commonwealth’s Development Opportunity Fund and a $2.5 million parking subsidy for a Norfolk city garage.

In return, Norfolk Southern agreed to invest $8.2 million in its Norfolk headquarters and bring 165 new jobs to Norfolk that paid an average minimum salary of $97,000 a year. The terms of the agreement dictate that Norfolk Southern has to submit annual reports showing it maintains at least 90 percent — or 148.5  — of the jobs it brought to Norfolk. The company has done so for 2017 and 2018.

With Norfolk Southern eyeing a move before its performance agreement with Norfolk expires, the company may have to pay back a portion of the subsidies it received.

For example, if by 2026 Norfolk Southern had maintained an average of 50 percent of the target new jobs number, or 82.5 jobs, then it would owe Norfolk’s economic development authority 50 percent of the incentive money, or $962,500. The example is cited in the actual performance agreement. There is also a provision for how the company would have to pay back its parking subsidy.

The Virginia Economic Development Partnership and Norfolk did not respond to follow up questions about the agreement by press time.

Norfolk Southern declined to respond to questions about its Norfolk performance agreements.

Daniel M. Siegel, a Sands Anderson lawyer in Richmond who specializes in public economic development deals, says it is unusual for a company to choose not to meet the terms of a performance agreement. He says it’s more typical for struggling companies to do so.

Siegel thinks it would be good for public relations for Norfolk Southern to pay back whatever it has received in public incentives and subsidies from Norfolk.

“It's such a breaking of the trust and agreement with the community regardless of what the agreement says,” Siegel says. “With a big company you would expect them not to nickel and dime it, but it does happen.”

Beyond the question of what it might pay back if it leaves, is what will become of Norfolk Southern’s local philanthropy if it moves its headquarters out of Virginia.

In 2016, the company’s total cash contributions were $11 million to nonprofits, universities and art institutions around the U.S., according to the most recent company report published online. Norfolk Southern contributed $263,900 to the United Way chapter in Hampton Roads in 2016, according to the report. That same year Norfolk Southern gave Atlanta’s United Way chapter $204,370.

The company donates to the Foodbank of Southeastern Virginia, the YWCA of South Hampton Roads and the Virginia Symphony, among other organizations around the state. Were Norfolk Southern to leave Hampton Roads, it may well reduce its Virginia charitable contributions in favor of organizations in and around Atlanta, says Robert McNab, an economics professor at Old Dominion University.

“It would require additional work by nonprofits and other charitable organizations to think about their strategies in terms of fundraising and in terms of management,” McNab says of a potential Norfolk Southern move.

“If one thinks of the psychological or marketing effect of losing a major headquarters to another city, that will be more significant,” McNab says. “It presents another challenge in attracting large Fortune 500 firms here to Hampton Roads.”

“Businesses evolve and they have to do what's in their best interest,” McNab says. “Norfolk Southern has been a great member of the community. It would be sad to see them go but we also have to recognize that this is a part of business.”

So was the original deal to use public financing to relocate Norfolk Southern’s corporate functions in Roanoke to Hampton Roads and keep it in Virginia worth it in the first place? McNab thinks so.

“In terms of net payroll and spending in the economy it would seem that the return on the investment has been relatively good for the Commonwealth, even though the Commonwealth would be losing a headquarters to a competing state,” McNab says.

For now, Norfolk Southern’s headquarters in Norfolk sits in a cluster of other office towers close to a mix of hotels and eateries. Ginger Davenport, the bar manager at Hell’s Kitchen on Granby Street nearby, says Norfolk Southern workers are among the patrons that make downtown Norfolk a lively scene. She hadn’t heard about the potential headquarters relocation and felt there was enough activity downtown to handle the potential loss.

“It would definitely affect us if they weren’t here anymore,” Davenport says. 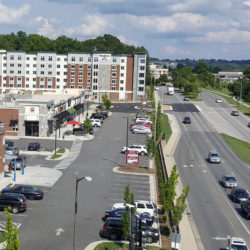