Home News What’s in a name?

What’s in a name?

If Will Sessoms had his way, the name Hampton Roads would be removed from signs, maps, marketing material and anything else describing Southeastern Virginia.

In its place, the Virginia Beach mayor wants a moniker that he believes more effectively identifies the sprawling region of 10 cities, five counties and 1.7 million residents. It’s been 31 years since civic and business leaders christened the region Hampton Roads, a name that identifies the channel through which the waters of the James, Nansemond and Elizabeth rivers pass into the Chesapeake Bay and the Atlantic Ocean. Sessoms says the name has failed to catch on. “People don’t know where Hampton Roads is,” he says. “It’s a problem for our region. We’ve got to do something better.”

He proposes “Coastal Virginia” as the region’s new designation, mentioning the name nine times during his 2014 “State of the City” address in March. “I’m willing to try anything,” he says. “It makes more sense. Coastal Virginia is where we’re located.” 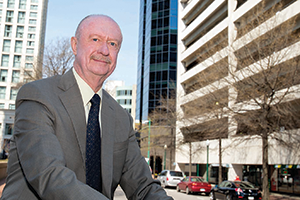 The Hampton Roads Economic Development Alliance, which markets the region to companies worldwide, isn’t ready to change its name, but Darryl Gosnell, its president and CEO, acknowledges that the area is hindered by not being identified by a dominant municipality.

“Everybody knows where Atlanta is,” he says. “We don’t have that. We have to explain a little more about where Hampton Roads is, but once we have the opportunity to talk to companies and get them to come here to visit, the area sells itself.”

He says companies are attracted to the region’s advantages such as the Port of Virginia, a high-quality workforce, relatively low tax rates and 12 colleges and universities that graduate 14,000 students each year.

“Overall, this area is very competitive,” Gosnell says. “We compete with everyone from Charlotte to San Antonio to Mexico.”  While the name sometimes leads to confusion, it also creates marketing opportunities, Gosnell says. “We have 10 very distinct cities that make up the region. Employees moving here can live at the oceanfront, downtown Norfolk, the suburbs or on a horse farm and be within 30 minutes of where they’re employed.”

An increasing number of advanced manufacturing companies have checked out the area, he notes, while many of the more than 160 international companies with operations in Hampton Roads, including Canon Virginia Inc. in Newport News and Stihl Inc. in Virginia Beach, continue to hire and invest.
“More companies are looking,” Gosnell notes. “I wouldn’t say things are back to where they were five years ago, but they’re improving slowly.”

Dealing with uncertainty
Hampton Roads lost almost 50,000 civilian jobs during the recession and has grappled with declining home values, military personnel cuts and economic uncertainty in the face of federal budget cuts. About 44 percent of Hampton Roads’ economy is linked to defense spending, leading many businesses to postpone hiring and new investment amid last year’s partial government shutdown and looming budget cuts.

However, Vinod Agarwal, director of Old Dominion University’s Economic Forecasting Project, sees a light at the end of the tunnel. “2013 was a year of uncertainty and anxiety,” he says, “but Congress agreed on a federal budget, and the uncertainty was removed.”  The budget blunted the worst effects of sequestration, automatic across-the-board defense cuts.

Agarwal believes increased port activity, health-care industry growth and increased tourism spending likely will raise regional income this year. Not all worries about federal spending cuts, however, have vanished. Sequestration could return in 2016, raising the possibility of retiring one Norfolk-based aircraft carrier.

Big-name retailers, including P.F. Chang’s, Whole Foods, Starbucks and DSW, signed up to lease space before the first shovel of dirt was turned at Newport News’ $250 million Tech Center. Along with shopping and restaurants, the center plans more than 250 apartments, office space and a technology and research center built on 100 acres next to the Thomas Jefferson National Accelerator Facility.

John Lawson, president and CEO of W.M. Jordan Co., is spearheading the development with support from Georgia retail developer S.J. Collins Enterprises, the city of Newport News, Jefferson Lab and the Virginia Tech Foundation. The mixed-use portion of the development could be ready within two years, while the research and technology center could take up to 10 years.

Meanwhile in Norfolk, Waterside Festival Marketplace is preparing to undergo a complete makeover. Baltimore developer The Cordish Cos. plans to invest up to $38 million to transform the 30-year-old facility into Waterside Live!, with a focus on dining and entertainment. Construction is slated to start later this year and be complete by summer 2016.

Also slated for a 2016 opening in downtown Norfolk: a 20-story, 300-room luxury hotel with a state-of-the-art 50,000-square-foot convention center. The city has partnered with Gold Key/PHR Hotels & Resorts on the $126 million project that is expected to pump $2 million into the city’s tax coffers.

More direct flights
Despite an upswing in the regional economy, some area officials think Hampton Roads is hobbled by a lack of direct air service to many major U.S. cities. “That’s one thing holding Hampton Roads back from attracting more Fortune 500 firms,” Gosnell says.

Sessoms agrees. “The city of Virginia Beach and the region need a strong regional airport,” he says. “We’ve got to do something about it. Businesses are frustrated with the time and cost it takes to travel from the area.”

The mayor believes that Hampton Roads’ two major airports — Norfolk International and Newport News/Williamsburg International — and Richmond International harm each other in competing for air travelers. “We have to work with airports to get more direct flights and have a truly international airport. I don’t want us to ever take that off the table.” 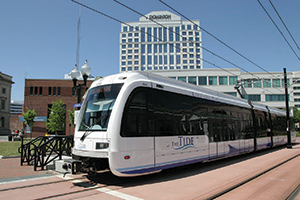 Chalk up Sessoms’ determination to his long battle to extend light rail into Virginia Beach, a move supported by more than 60 percent of the city’s voters  in a 2012 referendum. Hampton Roads Transit has put a $1.1 billion-to-$1.3 billion price tag on plans to extend its light rail system, The Tide, from its terminus at the Norfolk-Virginia Beach city line to the oceanfront. The cost may necessitate starting off with a shorter route.

“I hope we can get it to Town Center. That is the logical place,” Sessoms says. “Town Center is a high-density area with work, recreation and residences. It fits like a glove with light rail.”

Passenger rail would have a different look and feel if Virginia Beach contracts with American Maglev Technology Inc., one of three groups vying to develop and operate the transit system. The company has yet to build a maglev system in the United States, although it made an unsuccessful attempt at Old Dominion University in 2001. Maglev trains float over a guideway using magnets to replace the steel-wheel-and-track train. Federal funding that failed to materialize, along with suspension problems, doomed the ODU project.

American Maglev Technology’s $334 million proposal is one-third the cost of other proposals for a public-financed light rail system. “It gives us a lot of options to continue with light rail or other types of mass transit technology,” Sessoms says. “Shame on us if we don’t give it a serious look.”

United States Management has lined up $200 million in private financing to build an 18,000-seat arena that could be ready by 2016. The city would be asked to contribute the land and parking, as well as offsite improvements and related city services. USM also would receive about $7 million annually in tax revenues.

W.M. Jordan Co. would build an arena under a different model. It’s requesting that the city and the state pay $300 million, including $10.5 million in yearly debt costs for 25 years.

Sessoms believes City Council will accept one of the proposals and hopes construction will begin by the end of the year.

Transportation projects
Meanwhile, approximately $25 billion in federal, state and local revenue is expected to flow into Hampton Roads over the next 26 years, allowing the region to tackle nine significant, longstanding transportation projects, including  the construction of  a third crossing between the Southside cities and the Peninsula and widening a section of Interstate 64 to six lanes from Newport News to Williamsburg. At least $6 billion would be new monies generated within the region because of the transportation law that went into effect in 2013. State monies account for an additional $2.5 billion. The total also includes $16 billion in state and federal funding for construction and maintenance.

“When you put all that together, it makes an enormous difference in our mobility and access for commerce, commuters and tourism,” says Dwight Farmer, executive director of the Hampton Roads Transportation Planning Organization (HRTPO). “I don’t think anybody ever added it up this far out. It’s a big number, but when you’re doing mega-projects from planning to ribbon cutting, it can be 20 to 25 years.”

The Hampton Roads Transportation Accountability Commission, created during this year’s General Assembly session, will oversee the region’s transportation revenue. Chief executives of Hampton Roads’ 14 local governments will make up the commission, which can issue bonds and set tolls.
“It will be nothing but local elected officials calling the shots on prioritization and how to spend money,” Farmer says. Such a setup, he adds, would prevent another contract like the controversial one the state inked with Elizabeth River Crossings imposing tolls on the Downtown and Midtown tunnels. “The deal done at the Downtown and Midtown tunnels will never be done again. All will be done here with locally elected officials calling the shots.”

“It would absolutely be regional,” Sessoms says, noting that colleges and universities throughout Hampton Roads have signed on to the project, along with Sentara Healthcare and Bon Secours Health System, LifeNet Health and WellPoint’s Amerigroup. “Our city, region and commonwealth have been so dependent on defense dollars for way too long. We need to find other ways to diversify the economy. This is a wonderful opportunity to start a new economy.”