A session to remember

In the six weeks between the Virginia General Assembly’s March 12 adjournment and its April 22 veto session, the world changed.

The dramatic societal shifts brought on by the coronavirus pandemic were on display during the historic, surreal April meeting, in which the lawmakers gathered at unusual locations — the Senate at the Science Museum of Virginia, and the House in a large tent outside the Virginia State Capitol — where they could legislate while practicing social distancing.

As legislators debated and voted on Gov. Ralph Northam’s vetoes and amendments, protesting motorists drove in circles around Capitol Square, constantly honking their car horns for almost three hours as part of a “Reopen Virginia” rally. At one point, Speaker of the House Eileen Filler-Corn appeared to faint, collapsing behind her dais before quickly recovering. Sen. George Barker, D-Fairfax, recovering from open-heart surgery and pneumonia, participated at the Science Museum while sitting within a specially built Plexiglas cubicle.

The extraordinary session in Richmond memorably demonstrated the extent to which COVID-19 has disrupted Virginia and most of the world. During the veto session, the legislature delayed a planned increase in the minimum wage from January 2021 to May 2021 and also began grappling with the gaping hole the pandemic had blown into state revenue projections, necessitating a series of spending freezes.

Yet the drama somewhat obscured what had been a momentous 2020 General Assembly session — the first since the 1990s in which Democrats controlled both chambers of the legislature. The partisan flip and sweeping changes to Virginia law will be felt across the commonwealth — including among its businesses.

Even as they work through the tenuous and uncertain process of reopening, Virginia businesses face a raft of new laws taking effect on July 1. Taken collectively, these new laws will significantly affect the relationship between business owners and their workers.

“We’ve been so focused on the COVID-19 pandemic, trying to stay in business and thinking about returning to work, but now July 1 will be here before you know it, with a slew of very pro-employee employment laws taking effect,” says Todd Leeson, a partner at Roanoke-based Gentry Locke Attorneys. “Businesses need to understand there are some laws that will affect their business significantly if they don’t have their ducks in a row.”

A tale of two rankings

The first was CNBC’s selection of Virginia as America’s 2019 Top State for Business, announced in July 2019. One month later, anti-poverty organization Oxfam ranked Virginia as the worst state for workers.

“The two political parties in Virginia obviously have a very different perspective on how to address those things,” says Moran, “and you heard the mantra from newly elected Democrats saying, ‘We’re the best state for business, but we can also be the best state for workers.’”

While the new Democratic majority was eager to push through a legislative agenda that Republicans had blocked for decades, addressing issues such as gun control, abortion and protections for LGBTQ people, Democrats also set out to make the commonwealth friendlier to workers.

One of the first pieces of business was to reorder the nouns in the House business committee’s name to reflect its new priorities as the House Labor and Commerce Committee. On the other side of the Capitol, however, the Senate’s counterpart remained the Senate Commerce and Labor Committee — a notable difference foreshadowing the chamber’s role as a restraining influence on the House.

The 2019 election of the new, Democratic-majority state legislature triggered a wave of uncertainty and even fear among conservatives, especially in rural Virginia.

Fear of restrictive gun control laws led to 145 localities adopting resolutions declaring themselves “Second Amendment sanctuaries,” under an initiative organized by the Virginia Citizens Defense League, a conservative gun rights group. The movement culminated in a rally on Martin Luther King Jr. Day that drew tens of thousands of gun advocates to protest outside the Capitol.

Yet many of the inflamed passions visible in January subsided by the end of the session. This was the case, too, for the business community, which feared more sweeping changes that did not come to pass.

“Initially, we had concerns that the session may negatively impact the commonwealth’s economic climate,” says Barry E. DuVal, president and CEO of the Virginia Chamber of Commerce, but “the results were more favorable than perhaps the early headlines led us to believe. There’s a governing core in the middle that addressed many of the business concerns we had going in.”

“Our reforms will continue to keep Virginia as the top place in the nation to do business,” Filler-Corn says, “but we are now working to be the best for workers, with our incredible progress on minimum wage, collective bargaining for public employees and enacting protections against wage theft and employee misclassification. A fairer economy for working Virginians is also a stronger economy for business.”

Senate Majority Leader Richard L. “Dick” Saslaw, D-Fairfax County, calls the 2020 session “the most productive” of his 40 years in the Virginia Senate. Like Filler-Corn, Saslaw says lawmakers made significant progress for labor without harming prospects for commerce.

“We’ve got a huge economic disparity problem in this country; you can’t ignore it,” says Saslaw. “Look, we have been a big help to the business community, which is why we’re the No. 1 place to do business. We haven’t disturbed that.”

Not everyone agrees. Chris Saxman, a former Republican delegate who is now the executive director of Virginia Free, a nonpartisan business advocacy group, says the Oxfam study was poorly conducted and resulted in a series of new laws that will hurt business. He cited the minimum wage increase as an example.

“A lot of the bills that were passed are going to be injurious to the business community coming out of the pandemic,” Saxman says. “It’s going to be the cumulative effect of it all. We’re in for a cultural shift.”

The pandemic’s economic impact may also affect the new Democratic majority’s priorities. State general fund revenues fell 26.2% in April and 20.6% in May, compared with the year before, but Northam has said the impact on revenues hasn’t been as bad as anticipated.

Nevertheless, legislators plan to deal with budget revisions when they reconvene for another special session in August. However, that’s likely to be overshadowed by Democrats’ plans to introduce legislation during the August session dealing with policing and systemic racism, issues brought to the forefront by nationwide protests. 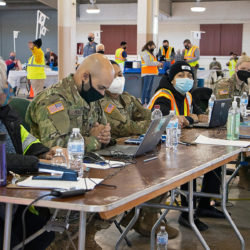 More vaccine going to Richmond and NoVa, as demand increases