Home News City is no longer a sleepy college town

City is no longer a sleepy college town

As Harrisonburg awakens on a summer Saturday morning, young people emerge from downtown apartment buildings and lofts to get in a run or to walk their dogs along the city’s tree-lined streets. Neighbors stop to exchange pleasantries       en route to the post office, the library or the grocery store.

Downtown merchants prepare their shops for the day’s patrons — the regulars whom the owners know by name as well as passersby who stop in to browse.

The smell of roasted coffees, fresh pastries and homemade breads fills the air. In a few hours, Main Street sidewalk cafés will be full, and the taps will be flowing at craft breweries.

Not your father’s city
Harrisonburg in 2019 is a far cry from the sleepy college town of decades ago. With an estimated 54,606 residents as of July 1, 2018, the city’s population has nearly doubled since 1990, according to the Weldon Cooper Center for Public Service at the University of Virginia.

Much of that growth, officials say, can be attributed to James Madison University, which has followed a similar trajectory during that span, increasing its enrollment from 10,000 to 20,000 students.

“That certainly has been an accelerator for us,” says Brian Shull, the city’s director of economic development, who arrived in Harrisonburg in 1994. “It has been fun to grow alongside JMU.”

Some of the univer­sity’s nearly 4,000 em­­ployees settle in Rockingham County, says county administrator Stephen G. King. The county’s population has increased 6.7% since the April 2010 Census, to an estimated 81,422 residents.

The combined growth of Harrisonburg and Rockingham since 2010 has been 8.6%, the third-fastest among Virginia metropolitan areas. It trails only Northern Virginia (12.4%) and Winchester (11.1%), according to Census data.

Boosting growth in their hometowns is nothing new for Virginia colleges and universities. Charlottesville, Blacksburg and Lynchburg all have blossomed around educational institutions. These schools spur commercial and residential development while producing a steady stream of graduates, many of whom stay in the area to work, start businesses and raise families.

Harrisonburg and Rockingham are capitalizing on their own group of schools, which include not only JMU, but also Eastern Mennonite University on the city’s north end, Bridgewater College near Dayton and Blue Ridge Community College in nearby Weyers Cave. Together these institutions produce more than 7,000 graduates per year.

Shull says the region’s diverse economy, natural beauty and recreational amenities are a major draw for young professionals.  “Workers now are often picking where they’re going to live, and then they find the job. That was unheard of 20 years ago. … But this area certainly checks all of the boxes.”

In April, Reviews.org ranked Harrisonburg seventh out of 325 metro areas nationwide on its 2019 “Best Places for Millennials to Move” list. (Lynchburg was No. 1.) The survey was based on factors such as unemployment rates, immigration flows, housing costs and crime rates. The report states that Harrisonburg is “great for outdoor activities, strolls to the local breweries and restaurants, or bringing out your artistic and creative side.” The city is also “a wonderful place for ethnic and linguistic diversity,” it says. That’s a nod to Harrisonburg’s status as a Church World Service refugee resettlement area since 1988. Children from families speaking more than 50 languages attend the city’s public schools.

Now a destination
A generation ago, downtown Harrisonburg was not much of a destination. Aside from a smattering of restaurants and bars, an ice cream stand and the Court Square Theater, there were few businesses to attract residents and visitors to the area. The Downtown Merchants Association was active, but many stores had abandoned Main Street for the growing U.S. 33 commercial corridor.

Beginning in the late 1990s several revitalization efforts were undertaken by citizens’ groups and the city.  “One of the first things that was on my desk when I arrived [as economic development director] in 1998 was the idea that we were going to try to do a revitalization of downtown,” Shull says. However, such efforts were largely volunteer-driven and lacked substantial funding.

With the launch of Harrisonburg Downtown Renaissance in 2003, the seeds for a vibrant community were planted. The nonprofit soon hitched its wagon to the National Trust for Historic Preservation’s Main Street America program, with its four-point plan for revitalization: economic vitality, design, promotion and organization. 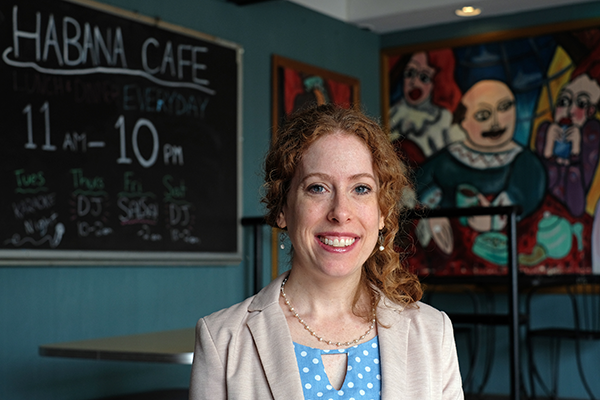 “It’s all open source, so we had that framework and the methodology, and we got to customize it to our local needs,” says HDR Executive Director Andrea Dono. “We had a bunch of people roll up their sleeves and take a piece of everything.”

From the beginning, HDR has worked with the city and area developers to meet the demand for housing downtown. The number of residences in the district increased from 150 in 2003 to 586 at the end of last year. Many of those units are part of mixed-use developments, with apartments and lofts above shops on the ground floor.

“That was huge for us,” Shull says, “because now you have 24/7 activity downtown. And that led to more restaurants and retail popping up and just more vibrancy.”

King says that, with the growth of JMU, Rockingham is seeing more urban-style development, including student housing. Two new apartment complexes are expected to open along Port Republic Road, just outside the city limits, next year.

Technology, food and the arts
When tech startups showed interest in locating downtown, the city responded by creating a technology zone. The language-learning software company Rosetta Stone was one of the first to take advantage of the zone’s tax incentives. Jenzabar, a Boston-based higher education technology firm, soon followed, opening an office on Liberty Street. One of the newest ventures is Chiedo Labs, a web and mobile app developer started in 2012 by a JMU graduate, Chiedo John.

Dono of HDR says the tech sector is growing — and clustering — organically. “Some people who left Rosetta Stone started their own ventures. And Chiedo … I’ll see the owner networking with somebody at a coffee shop or somewhere … and he’ll say to me, ‘Hey, this is so-and-so from New York and I’m trying to recruit him.’ There are people who love it here so much. And they want to have peers in their field. … So those conversations are happening, and new companies are opening up.”

In 2014, downtown Harrisonburg was designated as Virginia’s first culinary district. It boasts 38 eateries, the most recent of which, the Habana Café on Court Square, serves Cuban cuisine.  “We have this critical mass of restaurants,” Dono says, “from ethnic eateries to farm-to-table to longstanding icons like Jess’ Quick Lunch … There’s something for everyone.” Dono recently was able to help the owner of a longtime Korean food truck in the city, Mashita, find a space downtown to expand.

Downtown also includes a thriving arts scene, with boutiques, craft stores and makerspaces. “When you come to downtown Harrisonburg, you’re not just doing a simple transaction,” Dono said. “You’re actually having an experience where you get to meet the people who are making the products, and in some places you get to even watch it being made.”

As HDR has matured and added staff,  “we’ve taken on more and bigger projects,” Dono says. “That cycle of disinvestment has been reversed, essentially.”

Today, Harrisonburg and HDR are held up as models for downtown revitalization. “We have people coming here from other towns in Virginia and all across the United States,” Dono says. “We even hosted a delegation from Japan.” The organization won the National Main Street Center’s Great American Main Street Award in 2014 and recently was contacted about serving as a case study for an upcoming report by the Brookings Institution.

Downtown also has become a major recruitment tool for Harrisonburg and Rockingham. “I know that JMU [is] bringing people down here to show off the downtown,” Dono says. “So are the hospitals and the major employers. … We hear stories about people who stopped because they had to get off the highway or they had a flat tire or they’re tired or needed to stop for food. And next thing you know, they want to move here.”

A catalyst for development
JMU also has been a major factor in commercial development as well as the redevelopment of real estate in Harrisonburg and Rockingham.

The university’s acquisition of older properties, such as the former Rockingham Memorial Hospital and the old Harrisonburg High School, have been important to the revitalization of areas adjacent to the campus.

The Hotel Madison and Shenandoah Valley Conference Center — a joint venture involving the city, the JMU Foundation and a private developer — is helping grow the area’s hospitality and tourism sector.

The university also was instrumental in the decision of a leading research and development firm, SRI International, to locate a 40,000-square-foot biosciences center on a 25-acre campus in Harrisonburg in 2009. JMU has developed a close relationship with SRI by placing interns and graduates and by sponsoring joint research projects.

As part of the recently announced   $1 billion expansion of the Merck pharmaceutical plant in Elkton, JMU and Blue Ridge Community College will receive up to $2.5 million over five years from the state. The grant will be used to address Merck’s workforce needs and those of other major employers in the Shenandoah Valley, including MillerCoors, Danone/WhiteWave, Shamrock Farms and Hershey Foods.

With colleges and universities leading the way, local officials are optimistic about the region’s future. But they also want to ensure smart growth.

“We don’t want to grow just for growth’s sake,” Shull says. “We want to make sure that we have all the right infrastructure to accommodate growth that leads to better jobs and better economic well-being for our residents.”