Several candidates have already jumped into the 2021 Virginia gubernatorial race, and several more likely entrants are waiting to declare their candidacies until the 2020 election concludes.

Virginia’s constitution limits governors to nonconsecutive four-year terms, so incumbent Gov. Ralph Northam can’t run for reelection. Republicans haven’t won a statewide election in Virginia since 2009, and the Democratic field is more crowded than the Republican side so far.

Former Gov. Terry McAuliffe, who served as governor from 2014 to 2018, filed paperwork to create a gubernatorial campaign committee but says he won’t announce whether he’ll run until after the 2020 election. McAuliffe is serving as a surrogate for Democratic presidential candidate Joe Biden.

The only declared Republican candidate for governor so far is state Sen. Amanda Chase, R-Chesterfield. Others, including former state Sen. Bill Carrico, R-Grayson, longtime delegate and former Speaker of the House Kirk Cox, R-Colonial Heights, and Charlottesville entrepreneur Pete Snyder, who lost the GOP primary for lieutenant governor in 2013, are considering runs as well.

Fairfax and Foy were part of a Democratic statewide sweep with Gov. Ralph Northam in 2017. Fairfax and Northam were caught up in 2019 scandals. Northam came under heavy criticism for a blackface photo that appeared on his 1984 Eastern Virginia Medical School yearbook page. (The governor has denied he was in the photo, which also depicted a person in a Ku Klux Klan costume.) Two women have alleged that Fairfax sexually assaulted them in the early 2000s, but Fairfax has said the incidents were consensual.

McClellan won election to the House of Delegates in 2005 and served there until 2017, when she won a special election to fill Donald McEachin’s state Senate seat after he was elected to Congress.

Foy was a public defender until she was elected to the Virginia House of Delegates in 2017.

On the Republican side, Chase is running as a renegade Republican who refused to caucus with her fellow party senators in 2020. She was elected to the Virginia Senate in 2015 after defeating two primary opponents, including a 22-year incumbent, and winning the general election. She’s drawn attention for open carrying a .38 caliber firearm during the General Assembly session and for reportedly cursing at a Capitol Police officer during a parking dispute.

Other Republicans appear to be waiting to announce until after the 2020 election.

“My goal has been not to interfere with the 2020 race,” says Carrico, who served in the House of Delegates from 2002 to 2012 and the Virginia Senate from 2012 to 2020. “I don’t want to confuse the electorate. One of the things I felt about Amanda coming out [for governor] in February is that she takes focus off of what people need to be looking at.”

Chase has no apologies.

“I tell people I can chew gum and walk at the same time,” Chase says. “Some people want to criticize me for starting early. I’m going to win. People can criticize me, but at the end they’ll be calling me governor.”

See more from the cover package: 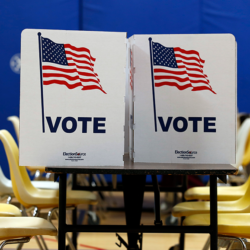 An updated look at this year’s gubernatorial race