After 16 years in the making, the $135 million FBI Central Records Complex opened in Frederick County in August 2020.

The 225,000-square-foot facility off Millwood Pike (U.S. 50) is designed to archive billions of pages of FBI records — some dating back to the bureau’s earliest days — from its 56 field offices and other locations around the country. It also provides the infrastructure and technology for the FBI to continue to digitize records on demand.

The FBI first announced plans in 2004 to consolidate and relocate its Records Management Division to a secure location near Winchester, and the U.S. General Services Administration identified a site in the White Hall section of Frederick County, near the West Virginia line. The facility was expected to be operational by 2010, but escalating costs and a major economic downturn delayed the project until Virginia’s congressional delegation, led by former U.S. Rep. Frank Wolf and U.S. Sens. Mark Warner and Tim Kaine, once again secured funding for it in 2014.

“I know the importance of ensuring that our law enforcement and intelligence agencies have the resources they need to carry out their missions with accuracy and efficiency,” says Warner, chairman of the Senate Intelligence Committee. “That’s why I worked to secure [the] Winchester [area] as the site for the FBI Central Records Complex. Now that it’s up and running, this complex is not just a significant economic investment in Frederick County — it’s also a testament to the strength of Virginia’s workforce and the commonwealth’s ability to contribute to our national security.”

Indeed, says Patrick Barker, executive director of the Frederick County Economic Development Authority, “it’s a project that has been working its way through the various channels for many, many years.”

Barker, who has helped secure a number of federal projects during a 20-year career in economic development, says the complex was unique “in that they were planning something for which there really wasn’t a playbook.”

“It took a while,” he says, “to find the right location, the right equipment and the right processes” to be able to take on the Herculean task of filing and digitizing the FBI’s vast collection of paper records — which the bureau refers to as “miles of files.”

In June 2016, the GSA released a Supplemental Environmental Impact Statement naming the Arcadia site at 2117 Millwood Pike as the preferred location for the new facility. The 59-acre tract was purchased for $4.75 million.

“At the time of the FBI announcement, we were just starting a conversation with Navy Federal and we realized there was a win-win situation here,” Barker says. “The county worked with both parties to the make sure the transportation system would be of suitable capacity for the safety of all employees and others in that area.”

Inside the high-tech warehouse, robots shelve and retrieve the records from their climate-controlled confines along a grid. The facility’s 450 human employees perform higher-level tasks, such as confirming the contents of each incoming file, digitizing records and determining which files should be preserved and which should be scheduled for destruction, in accordance with National Archives and Records Administration guidelines.

The staff consists of a mix of veteran FBI employees and new hires.

The facility directly supports the bureau’s counterterrorism, counterintelligence and homeland security efforts. It is designed to handle a multitude of requests from agents, investigators, prosecutors and members of the public seeking access to FBI files, as well as from other federal agencies trying to determine whether an individual has ever been the subject of, or mentioned in, an FBI investigation.

Despite its insular nature, the FBI Central Records Complex is a feather in Frederick County’s cap, Barker says.

“Having the FBI select Frederick County for a facility like this, and to be able to find the workforce and the infrastructure — the roads, the telecommunications — speaks volumes for us,” he says. “If you combine that with our corporate partners, like Navy Federal, like [decking and railing manufacturer] Trex, like [cabinet-maker] American Woodmark … you’re able to tell a really strong story.”

A continuum of learning 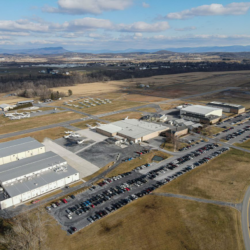 A turnaround in fortunes