Home News ‘Not for the faint of heart’

‘Not for the faint of heart’

Defense contracting, once a reliable mainstay of Virginia’s economy, has been hit hard by sequestration and the federal government’s emphasis on austerity. For small and midsize defense contractors, in particular, doing business has become particularly challenging.

Take the case of Global Dimensions in Fredericksburg, headed by Army veteran Chris Newton. In 2014, the firm, which specializes in language and linguistic services, had $8.2 million in revenues and 104 employees. In 2015, its revenues dropped to $6.3 million, and it employed 54 workers.

Even though many of Global Dimensions’ jobs are mission-critical, a designation that generally escapes the budget ax, its CEO says the draw-down of forces in Afghanistan decreased demand for his company’s services. To compete, he also must submit the lowest possible bid while simultaneously differentiating himself from the competition by having higher — i.e., more expensive — standards, such as employees with advanced degrees and top-level security clearances. These competing factors make it hard to make a profit.

So, like other small contractors looking for an edge, Newton tapped into a Small Business Administration program to help him survive in a hyper-competitive environment. In 2012, he moved Global Dimensions from its initial location in Alexandria to Fredericksburg, which the SBA has designated as a HUB Zone, or Historically Underutilized Business Zone. Under this program, small firms that locate in HUB zones get special access to federal contracts in exchange for hiring 35 percent of their employees locally. If Fredericksburg should lose its HUB designation, though, Newton says he will be forced to relocate again.

“Defense contracting these days is not for the faint of heart,” says Mark Moore, executive vice president and chief lending officer for John Marshall Bank in Reston. “The downward pressure on permitable profit is more difficult than it has ever been.”

Of all the states, Virginia is the most dependent on federal contracting. In 2014 (the most recent year for which figures were available), the U.S. Department of Defense spent $54.7 billion in the commonwealth — including $38 billion in contracts. That represented 11.8 percent of the state’s gross domestic product. A formidable figure, to be sure, but less than what the DOD once spent. Even before sequestration arrived in 2013, its spending had begun a retreat, and from 2011 to 2019, the U.S. budget office estimates that it will decline by 28 percent.

Moore is on the front lines of seeing how this shrinkage is affecting small and medium-size defense contractors, such as Global Dimensions. He works extensively with minority- and women-owned firms, which, like businesses in HUB zones, are eligible for preferential treatment or set-asides to compete with bigger businesses.

Even with that initial advantage, however, Moore says they must find a way to hold their own quickly.

“I am seeing an increased number of companies putting up the ‘for sale’ sign,” Moore says. “After two or three years, some decide it is just not worth it.”
Companies fighting to stay solvent are finding new ways to stay in the game. Some are moving into industries not as affected by cuts, such as cloud technology, cyberspace, counterterrorism and health care. Some are considering selling to foreign markets, although adapting to different cultures and accounting systems can be difficult — and profits sometimes can be several years down the road.

Many are trying to wean themselves from total dependency on federal money by diversifying into other sectors, both public and private.
All are looking to cut costs. 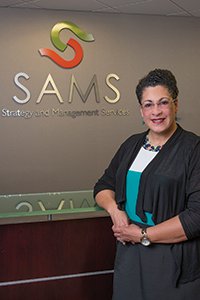 Staci Redmon is the CEO of Strategy and Management Services (SAMS) in Springfield. SAMS, which specializes in facility operations, has about 150 employees and had revenue of $17 million in 2015. Redmon recently ordered an assessment of the business, and the firm is diversifying by pursuing state and local clients. At the same time, its CEO is determined to eliminate all waste and frills while pursuing marketing platforms that are free or low-cost, such as an expansion of its online presence.

“We’re thinking about survival every day,” she says. “Even coming in at the same [revenue number as last year] would be a good number for us.”
The belt-tightening is not confined to Northern Virginia. Bob Campbell is president and CEO of Alliance Solutions Group (ASG) in Newport News, which specializes in emergency response and mass-casualty incident planning. ASG has 620 employees and had revenue of just under $13 million last year. It qualifies for set-asides because Campbell is a disabled veteran.

Even so, the past three or four years have been “painful and evolving,” he says. Money for preparedness training has dried up, and former clients invest what reduced funds they have in maintaining equipment. Contracting strategies have shifted, too, and procurement officers have become more risk-averse and less willing to commit the funds they do have.

Compounding this fiscal reality, Campbell says, the government has a growing tendency to award a bigger share of its jobs to larger companies. Where Alliance Solutions Group once was the primary contractor on jobs, now it usually is the subcontractor, a status shift that reduces its profit margin. “Work share hurts,” he says.

To stay afloat, ASG has begun to target the commercial market and has added Exxon Mobil and a Midwestern utility company to its client list. In addition, it opened an office in the United Arab Emirates, and Campbell says that the foreign sector now represents 10 percent of ASG’s work.
In its push to expand internationally, ASG has been assisted by the Virginia Economic Development Partnership’s Going Global Defense Initiative, which helps the commonwealth’s contractors develop strategies for operating overseas.

Paul Grossman, the VEDP’s vice president of international trade, says that 290 companies, representing 25,000 employees, have participated in the initiative and that 68 percent of them do defense work. The program is in its third year, and until now, has been largely funded by the Department of Defense. Virginia’s General Assembly this year agreed to fund the program through 2018.

Not all of Virginia’s small and midsize defense contractors are struggling. Dynamis, whose clients include the Department of Defense, Homeland Security and several branches of the military, has adapted well to the cost-focused environment.

Dynamis was able to move in and under-bid companies that didn’t take the government’s focus on cost-cutting seriously. Dynamis also “doubled down” on hiring the best employees it could find, many more of whom were available because of staff cuts among competitors.

“We’re very opportunistic,” Braun says. “We try to go after everything that goes through our crosshairs.”

Many defense contractors worry that the government’s laser-like focus on cost-cutting could ultimately be detrimental to U.S. security. Cameron Hamilton, chairman of the Small and Emerging Contractors Advisory Forum in Falls Church, says “contractors are having to cut overhead and indirect costs to maintain thinner margins. This reduces the attractiveness of the industry and makes it harder to retain talent at all levels.”

Yet, even with those thinner margins, Moore, the Reston banker, predicts that the industry “will not be going away,” and the reason is simple. “The country wouldn’t work without it,” he says.