In a story about John Tyler Community College in this issue, Karin Kapsidelis writes about the diverse student body that one student encountered at the school.

Sharing a campus with students on many career pathways was “a very humbling experience,” she says. “It’s like seeing a working community.

“I was meeting students from all different backgrounds – they’re doing welding, electricity and HVAC,” she adds. “Then you have the engineers and the art people. That’s the really cool thing about community college.”

That description resonated with me. I attended a two-year college decades ago in another state, and the experience made a big impression on me.

Like the Tyler student, I met a group of people from all walks of life who were pursuing different careers, but they all were serious about acquiring the skills they needed to reach their goals.

Although I was taking undergraduate courses, I was not pursuing an undergrad degree. I had graduated from college with a degree in English a few years before, but I had discovered a hole in my education that I wanted to fill.

Working for a small daily newspaper, I inherited responsibility for editing a weekly business page. Brief notices about staff promotions and store openings typically filled much of the section, but it also included a story each week about a local business.

One story that I remember was a profile of a local man who had founded a convenience store chain that eventually had locations throughout the Southeast. Another story was about a man who manufactured trailers used to haul new cars to auto dealerships all over the country.

I was intrigued by these stories about entrepreneurs: How did they get into business, find an unfilled niche and build their companies?

I had vowed never to enter a classroom again. But I wanted to learn more about business and economics, subjects I had never touched in college. In fact, I was a full-blown math phobic who, if given a choice, avoided any course involving numbers.

Nonetheless, I signed up for an accounting class one summer at a local junior college. The course turned out to be an intensive, six-week boot camp. As I remember it, we met twice a week for three hours each session. The first hour was a test on material covered in the previous class. The remaining two hours were devoted to new material and a review of homework problems.

The instructor, an MBA, was also the college tennis coach. He drilled the class on the basics of accounting as if he were training us for competition. At intervals he would stop to ask, “Do you understand? Do you have any questions? Now is the time to speak up.”

He wasn’t bluffing. If you didn’t have the material nailed down, there would be hell to pay on the next test.

My classmates and I formed study groups to prepare for each test. My group included a truck driver who was thinking of changing careers and a woman who was pursuing a degree after staying home to raise her children.

To my surprise, I survived the class and decided to take more. In fact, I wound up taking a string of courses over the next year and a half at the junior college and the satellite campus of a four-year state university.

When my family and I moved to Richmond, I entered the part-time MBA program at the University of Richmond. Poking along, taking one night course at a time, I finally graduated nearly five years later.

During this time, I worked at Richmond’s daily newspapers, moving from copyeditor to business writer to associate business editor.

Fourteen years ago, I moved from the daily newspaper to Virginia Business.

So, you could say that an accounting class I took on a whim 36 years ago changed the course of my career.

But what I remember most about that first class was my impression of my classmates. They were not kids making plans for their next football game or frat party. These adults were on a mission — to better themselves and provide for their families. They changed my outlook on education.

Learning, with time, the wisdom of economic literacy

A Clinton scenario could have ripple effects in Virginia 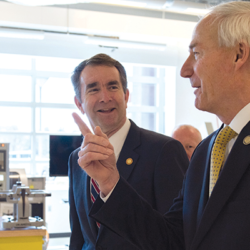