Shenandoah Valley residents have been brewing beer since the Scots-Irish settled in the region in the early 18th century. Three hundred years later, local brewmasters are crafting more than just beer; they’re creating experiences for tourists.

In May, tourism officials launched the Shenandoah Beerwerks Trail, which links craft beer with the valley’s many outdoor recreational activities and attractions.

“It’s a natural pairing,” says Sheryl Wagner, Staunton’s director of tourism who is the trail’s spokeswoman. “We know that craft beer drinkers love the outdoors, and so after a day of hiking, biking and exploring, now they can tap into our local beer culture.”

The Beerwerks Trail is just one example of how the valley is capitalizing on national trends to stimulate the regional economy.

Overall growth in the $106 billion U.S. beer industry has been tepid — with volume in barrels rising only 0.2 percent last year. Craft beer production, however, increased 12.8 percent.

“We think the Beerwerks Trail provides a new way to showcase one of the fastest-growing attractions in our market to a slightly younger demographic — who also love the great outdoors, music festivals, farmers markers, and exploring vibrant, walkable Main Street communities,” Wagner says.

Tourists initially may come to the region to try out its breweries, she says, “But they’ll also explore our region, eat in our local restaurants and stay overnight. It’s a win-win for everyone.”

“For a rural area like the valley, it’s a real boost, and especially for the smaller townships,” says Heidi Crandall, co-owner of Devils Backbone, which also has a production facility in Nelson County.  “Any time you have one industry in a cluster like that, it brings in more people, and that helps everyone.”

(Devils Backbone announced in April it is being acquired by St. Louis-based Anheuser-Busch. )

The sixth craft-brewing trail in Virginia, Shenandoah Beerwerks received a $50,000 grant from the Virginia Tourism Corp.’s marketing leverage program to support print, digital and social media marketing for the trail during the next fiscal year. Signs will be installed at each brewery, and promotional information will be available at visitor and welcome centers across the commonwealth.

“We are very excited about this grant, because we can greatly expand how we promote our region,” Wagner says. “We see this as a strategic tourism investment that builds off the booming craft-beer industry.” 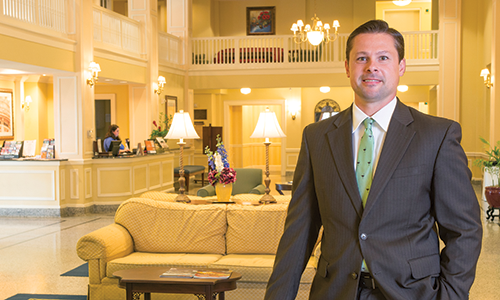 The region’s hospitality industry is jumping on the craft beer bandwagon, too. For example, in addition to its other travel packages, Stonewall Jackson Hotel and Conference Center in downtown Staunton is offering guests tickets that are good for their choice of local craft beers and souvenir glasses.

“For us, it’s an opportunity to expand our reach into other avenues,” says Damon Strickland, the historic hotel’s general manager. “It’s agritourism — grain to glass. There are a lot of folks who enjoy learning about the industry from start to finish. And we truly enjoy supporting anything that is local and part of the valley.”

The Distilled Spirits Council of the United States reports that sales rose 4.1 percent to nearly $72 billion in 2015. Sales of U.S. whiskeys increased even faster, up 7.8 percent. The surge in demand for bourbon has led to a shortage of barrels, according to the Wall Street Journal.

Darren Whitmer, Speyside’s general manager, says the search for a stave mill location started more than a year ago. “Our goal all along was to locate the plant in the Shenandoah Valley region due to the availability of white oak and the fact that the timber industry is strong there,” he says.

Speyside currently operates two plants in Scotland and one in Kentucky. The company is a part of a larger cask-making operation based in France. Speyside Bourbon Cooperage in Jackson, Ohio, was the company’s first plant dedicated solely to producing bourbon barrels.

The project is the first economic development project announcement for Bath since 2003. The company has agreed to get 80 percent of its timber from Virginia landowners.

“It’s a huge win for them,” says Carrie Chenery, executive director of the Shenandoah Valley Partnership, a regional economic development group. “Bath was able to provide the natural resources and the workforce that Speyside was looking for.” 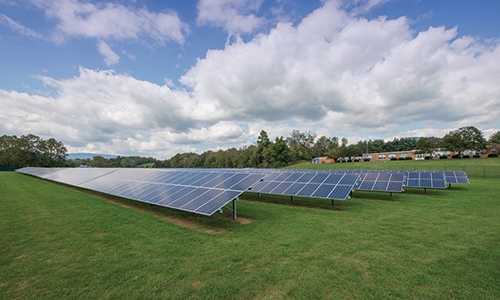 While developing its beverage industry, the valley also is responding to the growing interest in solar energy. Virginia’s first community solar project is being built at the BARC Electric Cooperative facility in Rockbridge County.

Instead of installing solar panels on their rooftops, customers of the community solar project will have access to solar power generated at a single facility. BARC is building and maintaining the system for its member-owners, who live in Rockbridge, Bath, Highland, Augusta and Alleghany counties.

The cooperative also built an educational center at the facility to teach students and visitors about solar energy production. The classroom features a touch-screen display of real-time data from the solar array.

At the announcement in August, Gov. Terry McAuliffe called the community solar project “an excellent model for stabilizing and reducing energy costs, while delivering clean solar power to large segments of households on the grid.”

Earlier this year, Merck, a New Jersey-based global pharmaceutical company, announced a $168 million expansion of its manufacturing facility in Rockingham County near Elkton.

The investment includes upgrading the plant’s infrastructure and adding new manufacturing facilities and equipment. Merck began operations in Elkton in 1941.

McAuliffe approved a $1.3 million performance-based grant from the Virginia Investment Partnership program, an incentive available to existing Virginia companies. Funding and services to support the company’s employee retraining activities will be provided through the Virginia Jobs Investment Program. 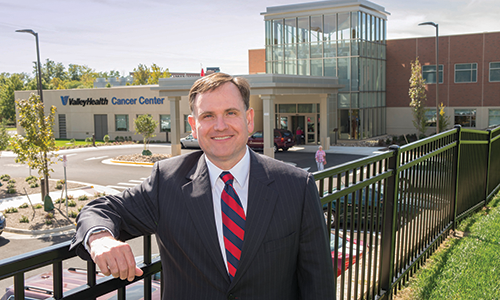 “Cancer care has long been a vital service for us and for the communities we serve throughout our region,” says Grady W. “Skip” Philips III, the president of Winchester Medical Center.

“This center enables our patients to conveniently access the entire spectrum of cancer services under one roof and have a more seamless, coordinated treatment experience,” he says. “It will be a wonderful place for our multidisciplinary team to work and our patients and families to be supported throughout treatment and recovery.”

Winchester-area plans
Winchester and Frederick County, in fact, have been buzzing with economic development activity in recent months.

The FBI is moving forward with the development of a Central Records Complex in Frederick County. The U.S. General Services Administration purchased a 59-acre site on Millwood Pike in June for $4.75 million.

The complex previously was being considered for the White Hall section of the county, near the West Virginia line, but the project has endured numerous funding and logistical hurdles since its initial announcement in 2004.

The estimated $109 million complex will streamline the FBI’s records management system. The 256,000-square-foot facility is expected to employ as many as 450 people.

Winchester Regional Airport is set to expand as a result of $1.5 million in funding from the Federal Aviation Administration. The airport is looking to construct 11 hangars on undeveloped land north of the runway and east of the Public Safety Building on Coverstone Drive to accommodate future airport development and growth.

Workforce partnership
The valley’s economic development depends upon it having a skilled workforce. This year marks the 20th anniversary of a partnership between Staunton-based Cadence Inc. with Blue Ridge Community College.

Cadence, a contract manufacturer serving health-care and life-science markets, established an endowment at the college for its Technical Studies/Manufacturing Engineering program. Many of Cadence’s employees are graduates or current students of the mechatronics program.

“Not only has Blue Ridge been a great source for new employees, but as our company has grown, many of our current employees utilize Blue Ridge to continue their education and improve their skills in order to grow with the company,” says Ken Cleveland, Cadence’s chief financial officer.

Amy Kiger, executive director of BRCC’s Educational Foundation, says it’s important to have partners in the community like Cadence who recognize the value that a community college provides.

Collaborations such as the one between Cadence and BRCC will help ensure that the valley will continue to attract skilled workers as well as tourists.