For last week, initial claims totaled 5,952, a decrease of 873 claims from the previous week, while continued claims went down by 1,453 to 36,337, VEC said. Compared to the same week last year, continued claims were 90% lower than the 372,070 claims in 2020, while initial claims last week were 82% lower than a year ago, when they reached 32,292. People receiving unemployment benefits through the VEC must file weekly unemployment claims in order to continue receiving benefits.

More than half of the claimants who filed for benefits last week (and the prior four weeks) reported being in these industries: accommodations/food service; administrative and waste services; retail; and health care and social assistance.

The regions of the state that have been most impacted continue to be Northern Virginia, Richmond and Hampton Roads.

Noting that the Hampton Roads area has seen a 40% decline in claims over the past two months, Dominique Johnson, a research associate at the Dragas Center for Economic Analysis and Policy at Old Dominion University’s Strome College of Business, said in a statement, “While we have yet to reach pre-pandemic levels, the number of claims filed in May and June 2021 had fallen below the roughly 10,000 initial claims filed in a single month at the height of the Great Recession. We expect this trend to continue in the coming months as the recovery continues to accelerate.”

However, notes Dragas Center Director Robert McNab, “While fewer residents of Hampton Roads are filing for and receiving unemployment benefits, we cannot forget that there were 69,000 fewer workers in the labor force in May 2021 when compared to February 2020. As the unemployment rolls continue to shrink over the summer, the next challenge will be to bring these workers back into the regional labor market. Rising wages and the return to full-time instruction in public schools in the fall will help, but employers in retail trade, restaurants and bars, and the tourism industry will continue to struggle to fill open positions in the coming months. Increasing COVID-19 infections, hospitalizations, and deaths amongst the unvaccinated due to the rise of the Delta variant also threaten to undermine the relatively tepid regional recovery.”

Nationwide, the advance figure for seasonally adjusted initial claims last week was 360,000, a decrease of 26,000 from the previous week’s revised level, according to the U.S. Department of Labor. There were 1,512,549 initial claims during the same week last year. 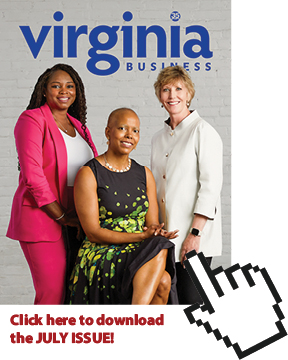 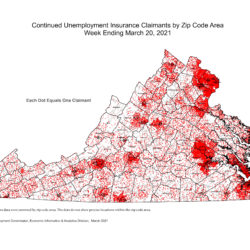 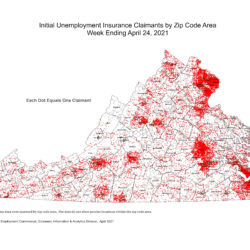 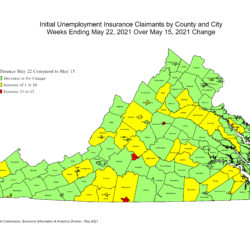