The $1.5 billion Navy Hill project — as proposed — may be killed next Monday by Richmond City Council, but that hasn’t stopped Virginia Commonwealth University and other heavy hitters from making economic development announcements in an effort to salvage the controversial project.

VCU Health System announced Tuesday that it would build a complex in the proposed Navy Hill development between 9th and 10th streets featuring 250 medical offices, child care services, a new Ronald McDonald House for families of young patients, a replacement facility for The Doorways hospitality house on East Marshall Street, plus retail space and 1,500 parking spaces. The facility would be in the space now occupied by the Richmond Public Services offices, and the city would sell the property to a private developer so it would be taxable, according to a VCU news release.

“There is tremendous potential to develop this section of Richmond into a thriving urban center that will generate much-needed tax revenue for the city,” said Michael Rao, president of VCU and VCU Health System. “Over the past few years, VCU has invested more than $1 billion to improve one of the mid-Atlantic’s most important academic medical centers with the hope that the neighborhood surrounding it will share in the city’s renaissance.”

With its announcement Tuesday, VCU Health joins other institutions that have made Navy Hill-related development proposals, including CoStar Group, the Washington, D.C.-based commercial real estate analysis company that already has 1,000 employees in Richmond. CoStar said in January it would build a 400,000-square-foot building in Navy Hill and double its employees — if the project goes forward.

Asked if VCU Health System would move forward with its plans if City Council didn’t approve the Navy Hill development, VCU Health Chief Administrative and Financial Officer Melinda Hancock said in a statement, “We have no ability to move forward with our urgent plans to address the needs of our patients, their families and our employees without the joint cooperation of both City Council and the mayor. We look forward to working with them in the mutual best interest of those we serve.”

The past week has seen other developments related to the Navy Hill project, including:

The $1.5 billion Navy Hill project is a public-private partnership proposed by a group of Richmond business leaders led by Dominion Energy CEO Thomas F. Farrell II to redevelop the area around the 48-year-old Richmond Coliseum, which would be replaced with a $235 million arena — the state’s largest entertainment venue.

The Navy Hill plans also include 260,000 square feet of retail and restaurant space; a 541-room luxury hotel within walking distance of the Greater Richmond Convention Center; 1 million square feet of commercial and office space; more than 2,500 apartments; a $10 million renovation of the Blues Armory; and a GRTC Transit System bus transfer station. VCU’s Center for Urban and Regional Analysis has estimated that the project, which is expected to take four to five years to complete, would create 9,300 permanent jobs and 12,500 construction jobs. 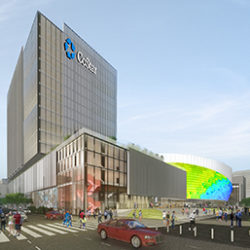 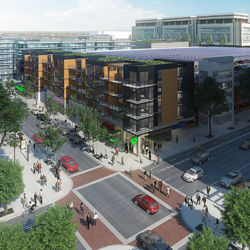