Report: Virginia gas shortage leaps to 52% in one day

Colonial Pipeline back up as of 5 p.m. Wednesday

According to a website tracking gasoline prices and shortages based on crowdsourced data, 52% of Virginia’s gas stations had run out of gas as of 9 p.m. Wednesday, a gigantic leap since 5 p.m. Tuesday, when GasBuddy.com reported 8% outages in the state.

The chief culprit appears to be panic buying prompted by reports of potential gas shortages stemming from the Colonial Pipeline shutdown six days ago due to a cyberattack. Colonial officials released a statement shortly after 5 p.m. Wednesday that the pipeline is now up and running.

“Following this restart, it will take several days for the product delivery supply chain to return to normal,” the company said in a statement. “Some markets served by Colonial Pipeline may experience, or continue to experience, intermittent service interruptions during the start-up period. Colonial will move as much gasoline, diesel, and jet fuel as is safely possible and will continue to do so until markets return to normal.”

Patrick De Haan, an analyst at GasBuddy, said in an interview with CNBC earlier Wednesday that the shortage affecting several states in the Southeastern U.S. and Washington, D.C., is mainly due to panic buying, and not because of the pipeline shutdown.

Virginia has two other primary pipelines that are still active, so the shortages here appear to be the result of panic buying, according to the Virginia Department of Emergency Management.

“As you can imagine, we are in constant contact with our federal, state, local and private sector partners to identify resource needs,” VDEM spokesperson Lauren Opett said Wednesday, noting that she can’t comment on the authenticity of GasBuddy’s figures, which are reported by people using the site’s app. “We will work to address any issues that arise. For now, our message is for Virginians to avoid ‘panic buying’ fuel and to avoid any unnecessary travel.”

Gov. Ralph Northam and other states’ governors declared states of emergency Tuesday to make more gas available in the event of a longer shutdown of the Texas-based pipeline, which supplies about half of the Southeast’s gas and jet fuel.

The most-affected areas in Virginia appear to be Hampton Roads and Northern Virginia, according to news reports, with a shortage of tanker-truck drivers slowing down refills.

A ransomware attack on the pipeline led to the voluntary shutdown, and in the past 24 hours, gas stations in the Southeastern U.S. saw a run on fuel; as of 3 p.m. Wednesday, 65% of North Carolina stations were out of gas, and 43% of stations in Georgia and South Carolina, GasBuddy reported.

According to AAA Mid-Atlantic spokesperson Martha Meade, the Colonial Pipeline shutdown was responsible for some outages in Virginia, but panic buying “is only exacerbating the problem,” and Virginia’s gas price average increased by 8 cents overnight Tuesday, to $2.87 per gallon. Nationally the average price is $3 per gallon, AAA reported.

“AAA is reminding drivers that there is ample gasoline supply in the United States,” according to a statement. “It is just a matter of getting deliveries to stations to meet demand and that there is no need to panic buy or to stock up on gas in portable containers.” Carrying extra gas in a vehicle can be dangerous or even deadly, they warn.

According to Northam’s executive order released Tuesday, “While current gasoline reserves in the commonwealth are sufficient to address immediate supply concerns, a long-term disruption in the pipelines will require transportation of fuel and other oil-derivatives via interstate and state roadways,” and the state of emergency will allow the state to use an emergency fuel waiver to help alleviate potential fuel shortages.

The order implemented a state emergency operations plan and assistance from state emergency management teams to state, local and tribal governments. It also authorizes the heads of executive branch agencies to waive normal regulations and “enter into contracts without regard to normal procedures or formalities.”

The order also activates a state law against price gouging, and state authorities are warning against panic buying and any unnecessary travel. 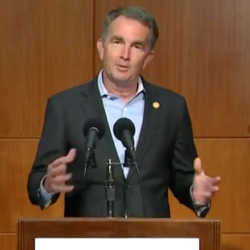